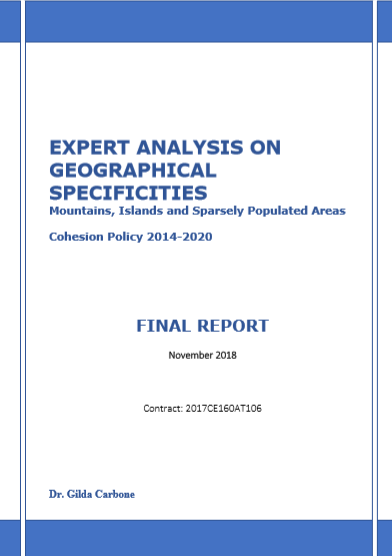 DG REGIO has published the final report of Gilda Carbone on “Expert analysis on Geographical specificities: Mountains, Islands and Sparsely Populated Areas”. This report was asked by DG REGIO to better understand how the Managing Authorities are taking into account areas with geographical specificities in their programming and implementation.

Even if the report does not bring any key new information, it confirmed several findings that Euromontana had also and confirmed several positions that Euromontana has defended publicly.  In particular, this report confirmed that even if mountain areas are correctly taken into account in the partnership agreements or in the Operational Programmes, there is a gap between programming and the real implementation. In addition, there is a low take up of the possibilities offered by the 2014-2020 ESIF (European Structural and Investment Funds) Regulations (i.e. derogation to thematic concentration, adjustments to co-financing rate, etc..). The report encourages to have specific calls and specific financial allocation for areas with geographical constraints; and for the future encourages the Commission to envisage new and different provisions to meet the needs of these territories.

More specifically for mountain areas, 13 Member States mention them in their Partnership Agreements (AT, BG, HR, CY, FI, FR, EL, IT, PT,SI, ES, SE, UK). The European Territorial Cooperation is particularly important for these areas, being quite often borders between two or more countries. In the Operational Programmes analysed, there was no specific Financial instrument established for mountain areas and only a few examples of ITI and CLLD exist such as the CLLD for the cooperation programme between Italy and Austria or two ITI for ALCOTRA programmes in the Alps.

The possibility of increased co-funding rates was only used in the Lorraine and Vosges Massif OP in France and in Croatia for some projects located in mountain areas.

To better take into account mountain specificities, the Managing Authorities suggested the following solutions, in line with Euromontana’s proposals

–   test new actions for innovation, also with the support of financial instruments;

–   strengthen the link and complementarities with EARDF;

–   maintain the possibility to award additional points for projects in mountain areas.

DG REGIO is now preparing printed material and exhibition panels to communicate the main findings of the analysis and also best practices projects and stakeholders will be able to ask for this material for their exhibitions or events.

Last week the @FAO endorsed the @IYRP2026 👏Euromontana welcomes this decision and calls for 🇪🇺 Member States to vote in bloc in favour of the proposal in Sept 2021 at the @UN to support #pastoralism
@YoldaInitiative @pastoralisme @hazifundazioa
https://t.co/RZKmJHPt2u

Reply on TwitterRetweet on Twitter2Like on Twitter3Twitter
Load More...