Being young in a mountain area: Euromontana’s report is out!

Euromontana, the European Association of Mountain areas, releases a new European wide report on mountain youth, 10 years after its first survey. Carried out with the support of Euromontana members and in collaboration with Educ’Alpes and the UNITA alliance, this study aims at better understanding the needs and aspirations of mountain youth. At the start of the European Year of Youth, this report brings the voice of 1134 mountain young people between 18- and 29-years old from 18 EU and non-EU countries.

However, mountain areas suffer from a difficult access to education, lack of employment and poor public transport. These barriers are clearly identified as major expectations for young people and have not changed in 10 years.

The mountains of tomorrow must be committed to sustainability

Young people also have ideas to build the mountain of tomorrow, they want to participate in local life and bring their voice to the table. Their ideal vision of the mountain for 2040 is a territory resolutely sustainable socially, economically, and environmentally. Young people imagine a mountain where the diversified economy would offer more jobs, where local life would be boosted by the arrival of new inhabitants, especially young people, and where the environment would be better protected.

Environmental issues are central to the results of this survey. The top three things to be further developed in mountain areas according to young respondents are: more wilderness, more behavioural change to protect the environment and more action to fight climate change.

Strong disparities between countries and regions

The Euromontana report analyses the results of the survey on a European scale. The above-mentioned trends are the common thread of the report, and they are confirmed in all the countries surveyed. Nevertheless, depending on whether they live in the Alps, the Carpathians, the Pyrenees or even in two nearby valleys, young people raise different challenges or opportunities. By analysing the data by country, more specific trends emerge and can provide food for thought on the needs of young people in mountain areas.

Romania, for example, records a high rate of young people interested in setting up a business in the mountains (44.7%) and Spain shows a particular attraction for so-called traditional mountain jobs (37%), such as farmers, shepherds, ski instructors etc.

In Italy and France, especially in the Alps, young people raised issues that were not mentioned in the case of the other countries. This is particularly the case for tourism and its consequences for the environment and local demography. In both countries, young people in the mountains deplore the impact of over-tourism on nature, but also on access to housing.

Satisfaction with the services available in the mountains also varies from a country to another. In Italy, only 54% of the young people surveyed told us that they were satisfied with the Internet access, compared to 75% at European level and 74% in Spain.

Because of these specificities, Euromontana has also compiled at the end of the report 6 country factsheets, available, for France, Italy, Norway, Poland, Romania and Spain. 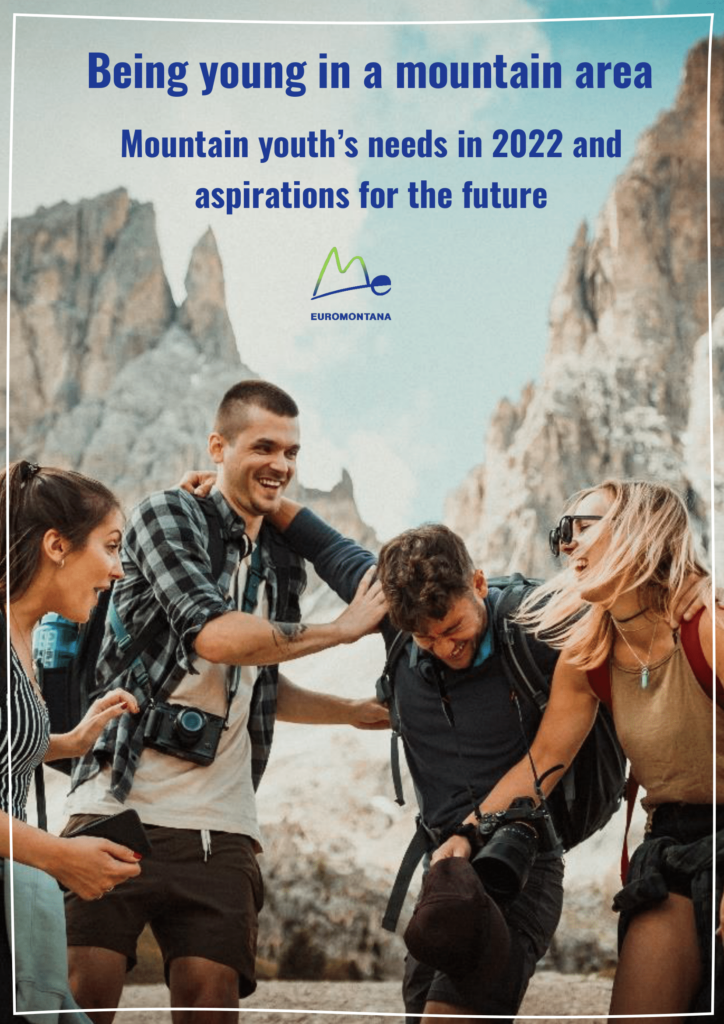 Through this report, Euromontana will bring the voice of mountain youth on the occasion of the European Year of Youth to make sure that they concerns are not left behind. Euromontana calls on policy makers to take up these messages and take action in response to the demands of young people. European, national, regional and local decision-makers must work hand in hand to maintain the attractiveness of mountain territories in the future, including by improving access to education and employment and by pursuing greater sustainability. Read Euromontana’s report Being young in a mountain area!

Euromontana will also report the messages of mountain youth during the discussions at the XII European Mountain Convention, on “Smart mountains: how to make our territories attractive and future-oriented?”, which will take place on 25-26-27 October 2022 in the Italian Natural Park and Biosphere Reserve of Sila.