During the European Week of Cities and Regions 2018, organised in Brussels, on 9-11 October 2018, a session focused on how digital solutions can help public administrations boost growth and reduce the obstacles and administrative burdens in European cross-border regions, which are often mountainous areas. The session was organised one year after the Commission adopted its Communication “Boosting Growth and Cohesion in EU Border Regions” where a strong emphasis was put on eGovernance, showing the sustained engagement of the EC on this topic.

The digital transformation of local governance can make the lives of individuals and businesses in border regions much easier. Indeed, cross-border data exchanges will reduce administrative burdens for beneficiaries and ease mobility. The aim of an effective eGovernance is also to increase transparency and encourage greater participation of citizens in political life.

The legal framework for eGovernance

As part of its Digital Single Market Strategy, the EC wants to take concrete actions for the development of cross-border digital public services. Indeed, in the EU’s internal market, people are able to move freely – either for work or for private reasons – so they also need to be able to deal easily with public services outside their home country.

The European eGovernment Action Plan 2016-2020 recognises this evolution as an opportunity and proposes 20 actions to make public administrations and public institutions in the European Union “open, efficient and inclusive, providing borderless, personalised, user-friendly, end-to-end digital public services to all citizens and businesses in the EU”. One of the key policy priorities of the Action plan is to modernise public 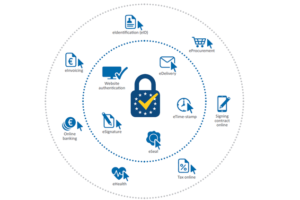 The EU Regulation N°910/2014 on eID and trust services for electronic transactions in the internal market (eIDAS Regulation) adopted in 2014 is a milestone in this field. The eIDAS Regulation ensures that people and businesses can use their own national eID schemes to access public services in other EU countries, where eID is available. The eIDAS Regulation also ensures electronic Trust Services work across borders and have the same legal status as traditional paper-based processes. As a matter of fact, the mutual recognition of eIDs between Member States regulated by eIDAS kicked in very recently, on September 29th, 2018, though it is only functional in Italy and Germany so far.

Speakers at the workshop presented useful applications for mountains areas.

Firstly, in the field of agriculture, the eIDAS Regulation will enable farmers to register land on the other side of the border, in the foreign agricultural services system, with their own eID. Indeed, animals don’t keep to national borders, especially in mountain pastures, and this evolution will enable farmers to comply with EU law (by declaring land use) while receiving CAP support. This example is currently implemented on the German-Dutch and Dutch-Belgian borders.

Secondly, concerning the health sector, the eIDAS Regulation will facilitate the access to the closest healthcare centres and will ensure for instance that babies which are born on the other side of the border for proximity reasons are still registered directly in their national system, thus streamlining their registration in the civil registry, social security and tax office systems all at once. This example is implemented on the German-Austrian border.

Finally, for Services of General Interest, a Eurocitizen residency card (also recognised an identity document in the same way as a student card, for example) is being tested on the Spanish-Portuguese border to give access to the same services to citizens living on both sides of the border in a same city (i.e. administrative services, libraries, sports facilities, etc.). The services offered by this card will soon include access to public transport and contactless payment.

Speakers at the workshop identified three main obstacles to the implementation of cross-border services: semantics, trust and cyber-security. However, enough political will can overcome these obstacles and the budget proposal for the next programming period shows a strong support from the European Commission. Indeed, the Connecting Europe Facility has received a 40% increase in the draft budget, with a total allocation now amounting to €42,3bn. Although the digital component is of only €3bn, this represents a 188% increase compared to the 2014-2020 programming period.

You can find more good practices on this topic on the “Boosting EU border regions” platform set up by DG REGIO.