During the 2019 edition of the European Week of Regions and Cities “Europe Closer to citizens of Islands Mountains and Sparsely Populated Areas” was organised by DG REGIO on 8th October. Marie Clotteau – Director of Euromontana – was one of the panellists to reflect on post-2020 regional policy in these specific territories. 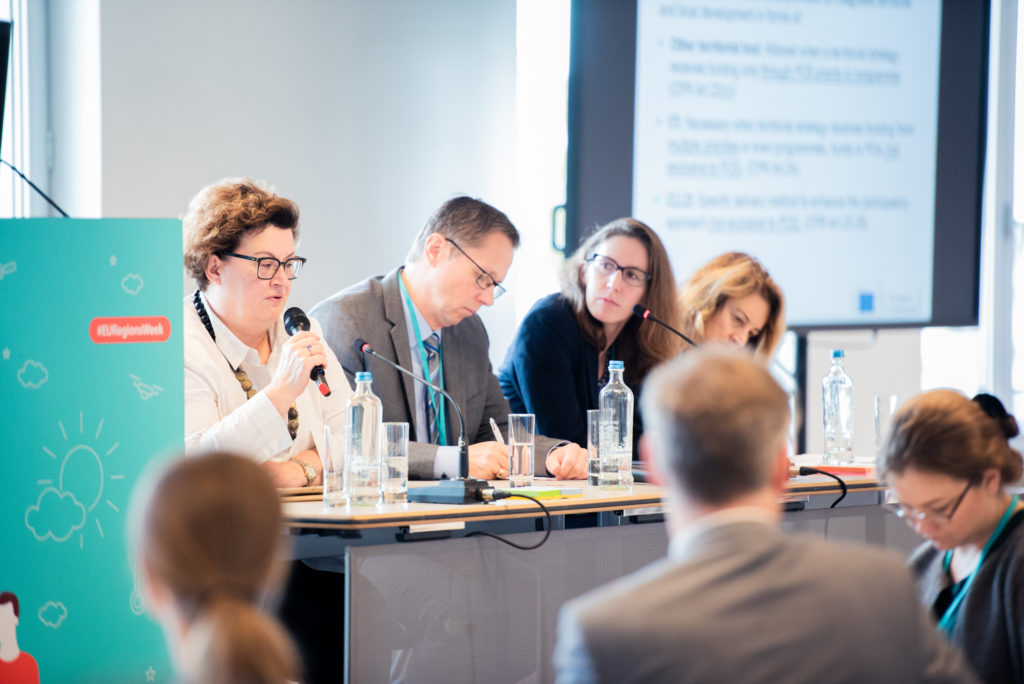 Wallis Goelen Vandebrock, Senior Advisor on Cohesion Policy implementation in areas with natural and geographic constraints at DG REGIO, introduced the new elements of the post-2020 Cohesion Policy. According to her, during the next programming period, the policy objective 5 “Europe closer to citizens” will be the main lever of action of the Cohesion Policy in mountain areas. The European Commission insisted on the importance of the sub-regional level (NUTS3) to build tailor-made and integrated development strategies, which should also be multi-sectoral, multi-stakeholders and multi-level. During the next programming period, the EU Commission also wants to prioritize the use of Integrated Territorial Investments (ITI) and Community-Led Local Development (CLLD).

Feedback from mountain areas on the Commission’s proposal

Marie Clotteau – Director of Euromontana – welcomed the opportunity given by the next Cohesion Policy to move towards the sub-regional level, enabling to shape strategies based on the specific needs of each territory with this policy objective 5 (PO5). Nonetheless with 80 % of the funds, in some regions, to be spend under the policy objectives 1 and 2, she encouraged the beneficiaries in the mountains to apply to other policy objectives and not to limit themselves to this PO5. She also welcomed the efforts done in the legislative proposals for further simplification, but encouraged both the Commission and the Managing Authorities to go further in this effort (develop more lump sums; unit costs systems; reporting could be simplified as done in other EU funding schemes).

Marie Clotteau also highlighted the lack of knowledge on ITI and CLLD at local and regional level. With only 5 examples in mountain areas at EU level, this new tool is not known sufficiently, is too complicated so far to implement and the Managing Authorities should support potential beneficiaries by building human capital and explain how to use these tools, otherwise, they won’t probably be used in a significant way in the next 2021-2027 programming period.

One solution for a wider use of CLLD/ITI tools was suggested by Euromontana, and other European stakeholders, such as the Conference of Peripheral Maritime Regions of Europe, for the European Commission to create a one-stop-shop at EU level.

An example of CLLD strategy in mountain areas was provided by Martin Traxl, Officer at the Department of Regional Development and Future Strategy Office of the Tyrolean Provincial Government, Austria. In a region where only 12% of the land is compatible with permanent settlement, the need for a tailor-made and inclusive approach was strong. Thanks to the important connection with Italy, the Tyrolean region implements both domestic and cross-border CLLDs. The region has made available a platform for all stakeholders involved in programmes at local level to exchange as well as a regional one-stop-shop for the management of all programmes, to avoid double structures at regional level and to ensure a good coordination of all European Structural and Investment programmes (including EAFRD). In the future, the Tyrolean Provincial Government wants to include in CLLD the concepts of Smart Villages and Smart Specialisation. Climate change issues are also a targeted topic to be included in local development strategies in mountain areas.

Key messages from Marie-Antoinette Maupertuis President of Assemblea di Corsica and Władysław Ortyl President of Podkarpackie - serwis samorządu województwa this morning at #Montana174 conference on Cohesion Policy in mountain areas 🌄👉 Mountains face specific challenges and infrastructure costs are higher👉 There should be an earmarking of funds for mountain areas 👉 Local people must be informed and trained to apply for Cohesion Policy funds👉 More support is needed for cross-border initiatives 🎥 Join us live from the European Committee of the Regions! ⬇us06web.zoom.us/j/81918000254?pwd=dFVZN29hdWprV3Q0eGZFUFQrQWpkZz09Programme ⬇www.euromontana.org/en/events/final-conference-how-to-foster-the-effective-uptake-of-cohesion-pol... ... See MoreSee Less

🎥 We are live from the European Committee of the Regions ❗️Join us online for #Montana174's final conference & learn more on the 2021-2027 Cohesion Policy in mountain areas 🌄Zoom link 👇us06web.zoom.us/j/81918000254?pwd=dFVZN29hdWprV3Q0eGZFUFQrQWpkZz09Programme 👇www.euromontana.org/en/events/final-conference-how-to-foster-the-effective-uptake-of-cohesion-pol... ... See MoreSee Less

🌄 Have you considered joining the Rural Pact Community? 🤝🔸Contribute to the implementation of the Long-Term Vision for Rural Areas in your territory🔸Receive useful and inspiring information🔸Make a commitment for the future of your mountain!Find all the information in our latest article 👇 ... See MoreSee Less

The European Rural Pact: what is it and how to get the mountains on board? - Euromontana

The creation of a Rural Pact was announced in June 2021 in the EU’s Long-Term Vision for Rural Areas. The Rural Pact is designed to involve all levels, including national, regional, and local author...
View on Facebook
· Share

📆 Our Montana174 project will be at the #EURegionsWeek !What tools and channels to use to easily and effectively explain Cohesion Policy to citizens? 🗨️We will discuss how to communicate on the 🇪🇺 cohesion funds in a workshop with Osservatorio Balcani Caucaso Transeuropa & EMA RTV - Onda Local de Andalucía Check out the programme and register 👇eu.app.swapcard.com/event/euregionsweek-2022/planning/UGxhbm5pbmdfOTYwMzg1 ... See MoreSee Less

@Euromontana's Carla Lostrangio writes the newest @regstud Blog examining the opportunities for #Mountain #Regions from #CohesionPolicy programmes that have been tailored to the needs of mountain areas.

Check out all the details 👉 https://t.co/JPq1nqG6La

We will discuss how to maintain the attractiveness of our regions towards #youth & provide some insights from our mountain youth report! 🌄

At #Montana174 event on #CohesionPolicy in mountain areas, @DPTeruel presented how the #ERDF boosts the development of the #SilverEconomy through our project! 📈

The official launch event will take place in Brussels on 6 October 2022. Stay tuned!