Within the framework of the 2018 EU Week of regions and cities, the Diputacio de Barcelona, the Wielkopolska region, the city of Copenhagen, the city of Malmo and the region of Hannover jointly organised a workshop on “Connecting rural areas and urban areas: the way forward to territorial cohesion”. 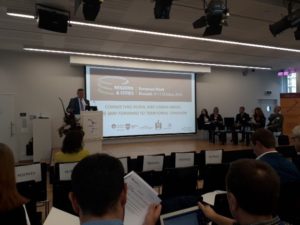 The debate aimed to showcase how local and regional authorities implement smart solutions to connect rural and urban areas, rural and urban communities, through integrated governance and territorial planning, based on broad partnerships and using innovative tools. During the workshop, many examples were presented, including the project “Greater Copenhagen”, presented by Anette Prilow, the Coordination of Greater Copenhagen, and Ola Yndeheim, Head of Unit for External Relation of the City of Malmö (in Sweden).

“Greater Copenhagen” is a project that includes 2 countries (east of Denmark and south of Sweden), 3 regions and 79 municipalities (both from rural and urban areas). The cooperation started 4 years ago and reaches today 4 million inhabitants. The main goal of the project was to build connection between these 79 municipalities and to enhance the attractiveness of the territory for talents and businesses.
The biggest issue faced by the regions was the availability of jobs. Most economic activity has always been centralised in Copenhagen, so many people living in rural areas were forced to move to the capital city. One of the biggest challenges of the project was to make sure to have good and effective infrastructures in order to communicate and work together, including across the border. For example, the project built a bridge that could connect Sweden to Denmark and public transportation has been improved in order for any person living in Greater Copenhagen to reach the city of Copenhagen in one-hour time maximum. This has allowed better connection and job opportunities for many people, for instance for those living in rural municipalities who wanted to work in the big city. But this has also given the opportunity to create exchanges and better communication between the municipalities.

The project  benefits to both people living in urban areas and people living in rural areas. Indeed, the cooperation has helped to develop tourism, broadband infrastructures and to promote local food.

* Tourism: The “Greater Copenhagen” has improved the tourism offer by proposing activities further away from Copenhagen – which has been the main pole for tourists visiting Denmark – and so it gives the opportunity now to visit the entire region. Visitors have increased also in rural areas, for instance.

* Broadband infrastructures:  Being as many as 4 million inhabitants has given more power to convince the broadband company to set up broadband in southern part of Denmark, that were not really seen as advantageous by the broadband companies. Local authorities succeeded in asking for high speed internet in all the area covered by “Greater Copenhagen” as it is essential for both citizens and companies to have the Internet.

* Local food: Most of the food is produced in the rural municipalities, so in order to promote the local food and to make sure that restaurants and shops in urban areas propose the local food, a campaign was launched. Today, the local food is used in gastro restaurants in the capital of Denmark and has been valorised a lot.

In addition, this project has resulted in having much more political power, explained Annette Prilow. “In practice, our main focus is international marketing. We see ourselves as one brand. Its neither an urban region nor a rural region, but us together”, said Ms Prilow during the workshop.

This example is interesting for Euromontana and its members as it shows how to enhance links and connection between urban and rural municipalities and communities and how these connections can help to better develop the economic activities in an entire region. However, Euromontana suggests paying attention to the imbalances between urban and rural areas. Indeed, such initiatives should also focus on the development of economic activities in rural areas to strengthen the attractiveness of these areas.

To conclude the debate, Guido Castellano, Deputy Head of Unit On The Conception And Consistency of Rural Development, at DG Agri, emphasised the fact that it is clear that “rural areas are seen as a big economic contributor to urban areas”, and when addressing the question of connecting both areas in rural policies, “we should recognize the potential of rural areas, which means see them as innovative, inclusive and sustainable” and “this potential should be reflected in all policies”.