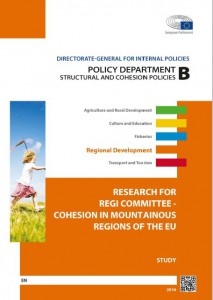 Martin Price, from the Centre for Mountain Studies of the University of the Highlands and Islands and vice-president of Euromontana, edited the report on “Cohesion in Mountainous Regions of the EU”. Andreja Borec, from the Faculty of Agriculture and Life Sciences of Maribor (Slovenia) and board member of Euromontana, was also among the contributors of the report. This study has been requested through the Committee on Regional Development (REGI committee) of the European Parliament by MEP Iotova to bring a scientific input to her own-initiative report on the same subject. The Iotova report has been adopted by the REGI committee on 17th March 2016 and is expected to be adopted in plenary session on 26th May 2016.

The study aimed to assess the current cohesion policy of the EU regarding mountain areas. It highlighted the fact that the EU should consider the specific potentials and opportunities of mountain areas as much as their challenges. One of the key conclusions of the report is that mountain areas are too diverse to elaborate an integrated European strategy.

“Mountain areas are at different stages of development. Differences between and within massifs need to be taken into account before envisaging a European framework for development strategies in mountain areas.”

However, some points uniting mountains areas, such as the permanent difficulties faced by mountain farming and the provision of public goods, could be addressed in a common framework.

“A framework for development strategies in mountain areas can be developed, taking into account the specific challenges and importance of mountain farming, the high levels of biodiversity in mountain areas, and their specific exposure to climate change.”

To do so, the researchers advocate building the common framework in such a way that it promotes integrated planning and management adapted to the local context.

“An integrated, stepwise characterisation model for mountain areas can help implementing place-based development strategies. More general frameworks for the promotion of mountain areas can be envisaged, as instruments to preserve decentralised settlement patterns and to support territorially integrated, place-based and partnership-based approaches.”