Mountain areas cover nearly 29% of the European Union and 13% of its population. This means that about one citizen every sixth lives in mountains. These regions provide several ecosystem services to all European’s population such as quality food and fresh water as well as they are they are biodiversity hotspot and carbon sinks. Today, mountains face many of the challenges of our century: from the alarming impacts of climate change to brain drain, ageing and outward migration.

However, mountains have also showed that they can address these challenges and become places of resilience and innovation. Its inhabitants have built on their creativity to cultivate innovation, accelerate climate mitigation and adaptation, support tourism, foster youth and employment, and enhance mobility. The European Union contributed to make this real through the funds of the Cohesion Policy. Since 2009, the European Union decided to pay “a particular attention to mountain regions” via the Article 174 of EU Treaty on Functioning of the European Union.

The European-funded Montana174 project has published a set of educational factsheets  illustrating the resources that the 2021-2027 Cohesion Policy will channel in mountain areas via the Operational Programmes as well as Interreg programmes. 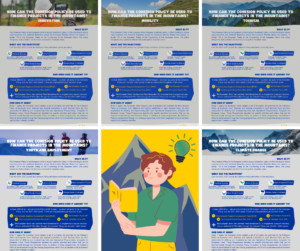 From these factsheets, it emerges that some resources of the 2021-2027 Cohesion Policy will finance the transition of mountain tourism towards an all-year tourism, to support investments to bridge the quality gap between educational facilities in rural and urban areas, to preserve mountain biodiversity, among many others. Some Operational Programmes, such as the one of the Auvergne-Rhône-Alpes Region in France foresees specific “interregional sections” dedicated to the Massif Central. In other cases, cross-border, transnational and interregional Interreg programmes can be used to finance new projects in Europe’s mountains. Overall, a large part of the budget can be used to finance green and digital transition in mountains and mountain residents.

This project has received funding from the European Union’s Directorate General Regional and Urban Policy under Grant Agreement No 2020CE16BAT209.