The collection of food waste, including food oils, remains a major challenge for mountain areas. The project “La Baraque à Huile” is a solution for collecting edible oils in the French Alps. The project has the advantage of collecting used oils in waste centers, including in mountain areas, thus meeting the demand of the inhabitants who are far from the usual oil collection sites and at the request of the environmentalists to better valorize the waste generated by consumers.

The lack of harvested oils and the creation of the hut 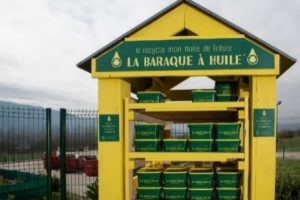 The initiative « La Baraque à Huile » (The Oil Shelter, in English), was created by a by a group of companies, namely Trialp, a Savoyard company specialized in the collection, treatment and management of waste, 1r design and Design C+B Lefebvre. The project aims to fill the lack of used food oils recycling. In France, only 5% of used edible oils are collected, compared to 75% of glass. The major problem is the lack of collection points and waste disposal centers and the lack of information on the importance of recycling the oils. In rural areas and even more in mountain areas, used food oil harvesting points are lacking. As a result, these oils are not harvested and therefore are not recycled.

How does it work and what are the objectives?

« La Baraque à Huile » offers a free service, with an accessible solution with a practical design (‘Olibox’ containers of 3 liters with a handle that can be easily stored at home and transported to a waste disposal center). Anyone can borrow a container of 3L, store their used food oil and, once the container is full, bring it back to the nearest harvesting point, including in mountain waste disposal centers, where the “Oil Shelter”, green and yellow, is located.
The aim of this harvest is to increase the quantities of edible oils collected, so that they are recycled and thus valorised, and transformed into biofuel. Once collected, the oil is first filtered, to remove any waste that should not be there. Then there is a settling phase to separate the water, the latter is then extracted from the oil. At the end of these stages, the oil is no longer a waste but a raw material that will be transformed into bio-fuel. The yield is then close to 100%.

With its solution, “La Baraque à Huile” plans to increase the rate of collection and recovery of these oils from 5% to 20%. For the moment, at Crolles waste disposal facility (Grenoble), in France, for example, 35 to 45% of oil is collected in addition, since the installation of” La Baraque à Huile” in 2017, there is a 100% biofuel valuation. The project is in full extension. For the moment, oil shelters have been tested in two waste disposal centers in Grésivaudan (Isère) and five waste disposal centers in Savoie and Ain have just been equipped. In the coming months, the group of companies hopes to have a deployment throughout France, also covering the mountainous areas.