First results of the CAP consultation have been published

The first results of the consultation on the modernization and the simplification of the Common Agricultural Policy (CAP), which took place between February and May 2017, have been published in a report by ECORYS.

DG AGRI received a total of 322 912 answers from all 28 Member States, mostly from Germany (46%), France (13%) and Italy (12%), as well as 1 423 position papers. Most respondents replied as individuals in their own capacity (97%), but not involved in farming. Only 7% of the replies come from individuals who see themselves as involved in farming.

ECORYS took care of identifying campaigns and analysing them separately. Indeed, out of this total number of answers, 258 575 come from the Living Land campaign launched by BirdLife Europe & Central Asia, the European Environmental Bureau and WWF EU. So after data cleaning, 58 520 answers only remained.

The public consultation highlights the fair standard of living for farmers, the pressures on the environment and climate change (both mitigation and adaptation), and the lack of growth and jobs as the three most pressing challenges that EU agriculture and rural areas have to face. All respondents agree that the current CAP is insufficient environmental challenges such as protection of biodiversity, reduction of soil degradation, sustainable use of pesticides and fertilizers, and preservation of genetic biodiversity. 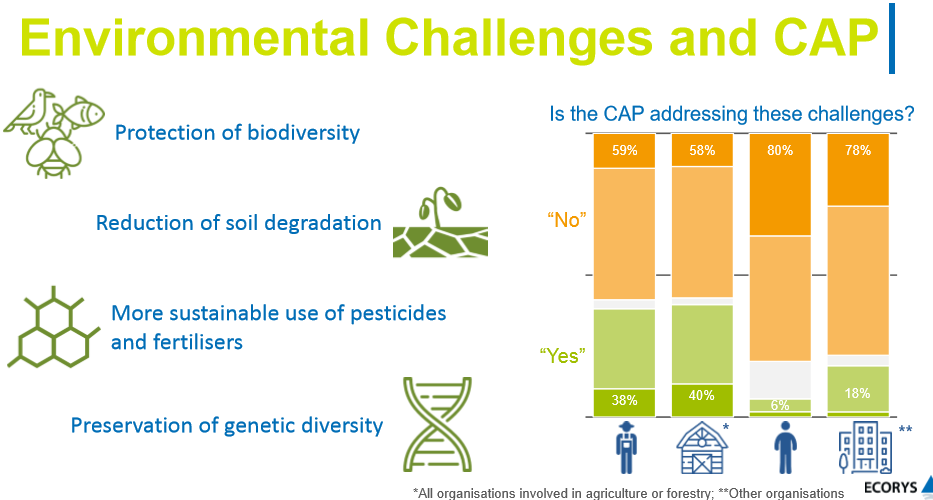 All respondent also agree that the CAP should do more on the 3 following priorities:

Euromontana sent its contribution to the CAP consultation which you can read here (French only). According to the results, the main topics that came through on behalf of non-economic stakeholders were public money for public goods, the need for a more environmentally and climate-friendly CAP, a shift from the 1rst to the 2nd pillar, a better accounting of health and nutritional objectives, and the question of Member State flexibility or not. Euromontana also insisted on public goods, sustainability and rural development.

The contributions will be published on-line shortly and a communication from DG AGRI is to be expected at the beginning of 2018. The report on the summary results of the public consultation is available here and the PowerPoint summary of the report here.