500,500 hectares of land burned in 2021, concludes the 2022 Joint Research Centre’s annual report on forest fires in Europe, Middle East and North Africa. In 2020, the burned surface amounted 340,000 hectares (compare with previous JRC report). On these 500,500 hectares, 100,000 were located in the protected areas of the Natura 2000 network, which is especially important in mountain areas.

The countries most affected by forest fires, in terms of number of hectares burnt, were Italy and Greece, followed by Spain, Portugal and France.

The report highlights the difficulty of fighting fires in the mountains, where geographical constraints – such as steep slopes and remote, hard-to-reach areas – make the work of firefighters more complicated. 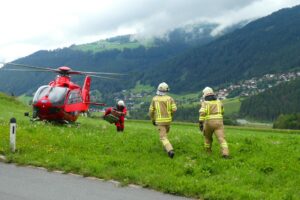 The JRC acknowledges the clear impact of climate change on forest fires, which are increasing in number and severity every year. In particular, more intense heat waves and droughts contribute to increase the risks and intensity of fires, including outside the summer season.

However, the JRC also notes that 96% of forest fires are caused by humans. The report highlights, for example, that in some places, such as the Italian Alps, the 2021 lockdown due to the COVID-19 pandemic has contributed to a decrease in the number of forest fires, with fewer people present in open and forested areas.

Thus, efforts in prevention but also in detection and rapid response are needed to deal with these fires. Euromontana is involved in the H2020-funded FIRE-RES project, whose aim is to set the basis for a pan-European integrated approach to fire management and to develop innovations to deal with extreme wildfire events. FIRE-RES will develop 11 Living Labs across different European regions and beyond.

The annual JRC report on forest fires is always based on the final reporting of fires from the previous year. Yet, the report also provides some preliminary conclusions regarding 2022.

In the framework of our FIRE-RES project, we have published articles on how mountainous territories such as Catalonia or Lesbos managed fires in the summer of 2022.