Get out there to get in here!

Researchers believe Norwegian outdoor life contributes to good integration. This is the starting point for an Innovation Action led by the Eastern Norway Research Institute (member of Euromontana).

Immigrants in many cases are crucial for the small municipalities in the rural areas of Gudbrandsdalen, four hours North of the Norwegian capital, Oslo.

“Ethnic Norwegians move to the cities”, researcher Tor Arnesen explains. “It is immigration from abroad that attenuates the decline in population in the rural areas. Inclusion of immigrants is of course important for long-term development.”

New solutions for inclusion and integration have to be found.

As part of a SIMRA Innovation Action [see footnote], Tor Arnesen and his colleague Mari Bjerck have organised an innovation seminar for representatives from different refugee and immigrant services in the remote area of Gudbrandsdalen. Special guest at the seminar was Havva Curkukaya, head of inclusion of the Norwegian Trekking Association in Drammen, Norway’s 6th biggest city with a 28% immigrant population. Havva Curkukaya is originally from Turkey, and she has managed to inspire many people with multicultural background to get out in the great Norwegian nature.

“It’s not credible when Norwegians, who are born with skis on their feet, tell people it’s easy to learn how to ski. But it is credible when I, with my background and culture, tell the story about how I learned to ski at 35-years-old”, Curkukaya says.

She meets a lot of immigrants who are afraid of the forest and the mountains because in their home countries, Nature often is the stage of war.

For many Norwegians on the other side, the key to a happy and healthy life is embracing the great outdoors. “Norwegians are more pleasant people when they are in motion”, recons a woman from the refugee service.

So how to make those different worlds meet?

Low-threshold is the keyword. It should be easy to get started. In the beginning perhaps, a short walk in the neighbourhood is good enough. Or collecting berries and mushrooms. “And by all means, Havva Curkukaya says, do not have too much focus on expensive equipment and clothing. Funds can be sought. And most Somali women also do excellent cross-country skiing in skirts.”

Havva Curkukaya explained about ‘freshman-courses’ where people learn how to use a map and a compass. She has established women-only walking groups and on big events, she and her colleagues put out a halal grill as well as a ‘normal’ one. “In Nature or around a fire, the distance between people is much smaller, Curkukaya believes. A common identity is formed.”

Another approach to integration

The SIMRA-researchers find this approach interesting because in Norway, integration is normally all about language and labour. “Using outdoor life can change this, thinks Tor Arnesen. What if refugees first get started with creating a social network? Language and jobs might become established through the contacts they got while hiking.” 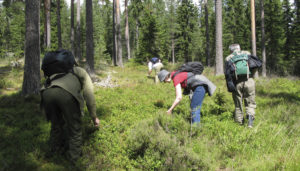 He adds: “In this SIMRA-project, we are trying to facilitate the exchange of ideas and networking between NGOs, pushing a little and watching what is happening. The road of outdoor life can have a significant potential as a social innovation that can inspire similar processes, even outside the Norwegian context”.

The participants of the innovation seminar are inspired. However, it’s not about just copying Havva Curkukaya’s recipe. The Drammen department of the Trekking Association lies in a populated area, just half an hour South of Oslo. In Gudbrandsdalen on the other hand, it can take hours to drive from one place to another. The regional Trekking Association here only has one part-time employee, covering the huge area. And where to find volunteers to get started?

Havva Curkukaya can see the obstacles but insists on the low-threshold approach and continues with tips: “Every person wants to be a resource, why not invite immigrants to become volunteers in the Association? And it’s about time to have a close look at the brochures and programs used in communication: they often have pictures of white Norwegians in expensive brand clothes”. Havva Curkukaya concluded “People with another background can easily conclude hiking is nothing for them, so why not use a picture of someone who looks different?”

This Innovation Action is carried out in the framework of the SIMRA project, an EU H2020 research project ENRI and Euromontana are partners of. The difference between a case study and an innovation action mainly lies in the degree of involvement of the researcher. In the case studies, they collect and analyse empirical evidence whereas in innovation actions, they act as observers, facilitators and analysts of social innovations.

This article was written by Windy Moe from the Eastern Norway Research Institute.