How can Cohesion Policy help tackling brain drain in rural and mountainous areas?

On 21st June 2022, Euromontana co-organised with the RUMRA & Smart Villages intergroup the event “Rural brain drain: How can the Cohesion Policy help reverse the trend?”. Hosted by the Member of the European Parliament Hannes Heide, the event was an opportunity to discuss about strategies and recommendations to counter brain drain in rural and mountainous areas, using tools and funds from the Cohesion Policy. 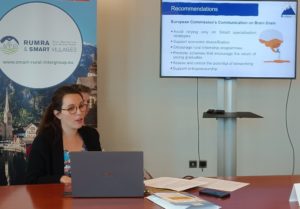 Many mountain areas in Europe are experiencing a demographic decline due to a lack of attractiveness. In these areas, ageing, youth outmigration, brain drain and sometimes depopulation led to a vicious circle of further loss of attractiveness and services. “Mountain areas are attractive towards young people, our recent report ‘Being young in a mountain area’ revealed that 66% of them want to stay living in the mountains” said Blandine Camus, Communication & Policy Officer at Euromontana. Yet, she explained that they struggle to find employment opportunities that fit they academic background.

In fact, highlighted Ms Camus, the lack of diversified and qualified positions in mountain areas are the two main drivers of brain drain. “In our mountain youth report, many young people deplored that they could not find a job in the mountains outside the agriculture or tourism sector, pushing them to move to urban areas to find a job matching their educational background”. 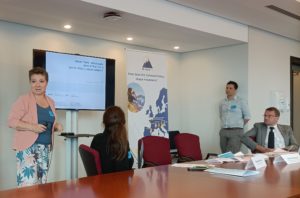 Vesna Caminades, from the Autonomous Region of South Tyrol-Bolzano’s Liaison office in Brussels, presented a study conducted by the Chamber of Commerce, lndustry, Crafts and Agriculture of Bolzano “Brain drain – brain gain: how attractive is South Tyrol’s labour market?”. She insisted on the fact that even though the region is attractive and provides a good quality of life, the territory is still facing the issue of brain drain. In South Tyrol, in addition to the language barrier, workers face difficulties in finding positions that match their qualifications, explained Ms Caminades.

In fact, the study produced by the Chamber of Commerce, lndustry, Crafts and Agriculture of Bolzano demonstrate that 50% of outmigrants mention the lack of qualified job opportunities as the reason pushing them to leave the area. Vesna Caminades highlighted that South Tyrol intends to attract more young people in the region, in particular by invested on mobility. She also presented the “New European Bauhaus of the mountains” initiative, in which Eurac Research and Autonomous Province of Bozen/Bolzano – South Tyrol are involved. This community-led project seeks to improve the quality of the built environment and citizens’ quality of life in rural and mountain areas and could have positive impact on the region’s attractiveness, stressed Ms Caminades.

Blandine Camus, Communication and Policy Officer at Euromontana, presented the activities carried out in the framework of Montana174, a DG REGIO funded communication campaign on Cohesion Policy in mountain areas. In particular, she presented some of the examples from the project’s brochures on youth and employment as inspiring examples of initiatives that can help to reverse brain drain. She also insisted on the fact that funds are available to cope with brain drain in the current programming period. The objectives for “Europe closer to citizens” “Greener Europe” and “More social Europe” can in particular help to build locally led strategies for attractiveness, to develop and structure new promising sectors in the mountains creating qualified jobs in the circular or bioeconomy and to provide more educational opportunities in our regions, preventing young people from migrating to urban areas to study. Euromontana invited participants to read Montana174’s factsheets to get more information on the funds available through the 2021-2027 Cohesion Policy.

In the framework of the European Year of Youth, the European Commission is currently working on a Communication on brain drain and how to mitigate challenges associated with population decline using the tools and funds from the Cohesion Policy. Euromontana contributed to the European Commission’s public consultation and welcomed the intention to limit brain drain using the Cohesion Policy. Yet, Blandine Camus warned that strategies against brain drain should move beyond the Smart specialisation strategies. Although some have proven to be beneficial for mountain regions, many of these strategies are often solely focused on traditional sectors – like the agri-food production and tourism- and mainly fail to engage with actors from most remote areas. Among other recommendations, Euromontana called regions to use the Cohesion Policy funds to diversify their local economy, support rural entrepreneurship through specific support schemes, build territorial attractiveness strategies to attract back young graduates and families.

Culture as a driver of attractiveness for mountain areas

Hannes Heide, Member of the European Parliament and host of the event, concluded the conference stating that “Europe is decided in the rural areas. Brexit is an example of that, and we should listen more to rural people”. He particularly insisted on the role of culture as an engine for sustainable regional development for rural areas. 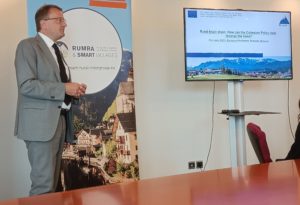 MEP Hannes Heide is originally from Hallstatt, Austria, a village from the the Salzkammergut region. The area is the first inner-Alpine region to hold the title of European Capital of Culture for 2024. In Hallstatt and 24 other mountainous municipalities of this region, the European Capital of Culture will be the opportunity to promote the traditions of the territory but also to reflect on mobility, services, sustainable tourism, and socio-cultural offer for local communities and not only for tourists, highlighted Mr Heide.

“The main take home message from today’s event is that 66% of young people want to stay in the mountains” welcomed the MEP before encouraging all stakeholders to work towards better quality of life and stronger attractiveness for mountain regions.

Guillaume Corradino, Director of Euromontana, closed the event by inviting participants to join Montana174’s final conference in Brussels on 20 September 2022 to know more on how to foster the effective uptake of Cohesion Policy funds in mountain areas.