Interview of the month: Meeting Bernat Claramunt from CREAF (Spain) 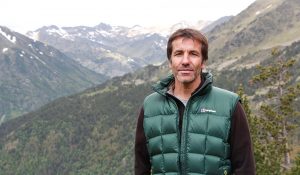 CREAF stands for Ecological and Forestry Applications Research Centre, it is an independent public research centre conducting research in the field of land ecology. Founded in 1987 in Catalonia, Spain, CREAF is a consortium formed by two universities (Universitat Autònoma de Barcelona and the University of Barcelona), IRTA, the Government of Catalonia, the Institute of Catalan Studies and CSIC. Its main objective is to generate new knowledge and create innovative tools in the field of land ecology, including in mountain areas.

In 2016, CREAF decided to join Euromontana. We met with Bernat Claramunt López, researcher, to know more about their research in forestry and mountain areas and their involvement at a local and European level.

Euromontana: Could you explain what is the objective of CREAF and what is your hope to achieve for mountain areas?

Bernat: “CREAF’s main objective is to generate new knowledge and create innovative tools for land ecology. Through our research, we provide valuable information for decision-making in planning and environmental management of the territory. For instance, we work on how forests regenerate after fire or how landscape changes affect biodiversity. The centre does not specifically target mountain areas in its research activities but many of our research projects take place in forests which are mainly located in mountain areas. Moreover, two CREAF researchers have been part of the scientific committee of the Pyrenean Observatory on Climate Change (OPCC) and one researcher was involved in the redaction of the Strategic Research Agenda “Mountains for Europe’s Future” a led by the Mountain Research Initiative (MRI).”

Do you have any example of innovative tools you have created and that could be used in mountain areas?

“Several CREAF researchers work on the development of computing tools such as GIS. GIS means Geographical Information System, it is a system that allows the consultation and analysis of a large quantity of information about our natural heritage. This tool could also be used in mountain areas.”

Why did you decide to join Euromontana in 2016?

“We joined Euromontana following the X° European Mountain Convention, in Bragança, Portugal where we met the members and the network.
We were attracted by Euromontana’s approach bringing a wide range of mountain stakeholders together. We often work in a “science bubble” without being in touch with stakeholders of other sectors or from diverse backgrounds. We thought it would be beneficial for CREAF researchers to work more often with other European mountain actors.”

How does Euromontana support the work of CREAF?

“The CREAF’s objective is to work as a bridge between academia, administrations, and society, promoting awareness and exchanging knowledge within its scope of activities, at the local, regional, and global levels. In this way, Euromontana is the perfect European network for us. Some CREAF researchers started to use the new projects platform to exchange with others, find new partners and share findings.”

CREAF has been involved in the creation of a new Network for European Mountain Research called NEMOR. Could you tell us more about it?

“NEMOR is the Network for European Mountain Research. It was created a few months ago after the changes that occurred within MRI (Mountain Research Initiative) who could not lead anymore any follow-up work to be done after the publication of the Strategic Research Agenda. We wanted to continue the discussion on specific European mountain research and enhance new research. Euromontana, with Martin Price, helped with the creation of this initiative and hosted the network with the active involvement of mountain researchers in and out Euromontana. I have taken the lead of the initiative since October 2017. Our short plan is to try to develop strategic visions for the future and convince policymakers that research in mountain areas can help and is fundamentally important not only for mountain areas but for everyone”.