Interview of the month: meeting with Milan Boleslav, from the Union of Marginalized Areas (Czech Republic) 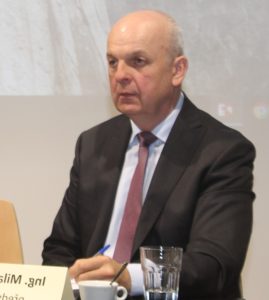 Svaz Marginálních Oblastí is the Czech Union of Marginalized Areas, an organisation representing mountain farmers. Created in 2002, the Union gathers more than 300 farms in the country, defending extensive production models and the various benefits of mountain agriculture for the environment and the attractiveness of these regions. We met Milan Boleslav, President of Svaz Marginálních Oblastí, to better understand the Union’s activities.

What are the specificities of mountain agriculture in Czech Republic?
“In the 1990s, a major restructuring of agricultural production was carried out, coupled with extensive grassing of sloping land, especially in mountain areas. Different solutions were developed to keep agricultural production in these regions after the breakdown of state farms. The more extensive and multifunctional farming model has proved to be the right way to gradually stabilize this sector.
The specificity of agriculture in the areas in which our Union operates is the expansion of cattle breeds that did not exist in the Czech Republic before. Today, meat cattle is the main source of income for local farmers and generates many environmental benefits. It enables a lower soil erosion, a better ability to contain rainwater and carbon dioxide as well a stronger capacity to resist to climate change.”

How do you promote mountain agriculture in Czech Republic?
“One of our objectives is at national level to support a positive perception of farming and its multifunctional dimensions in marginalized mountain areas. We focus for instance on the environmental role of mountain farming in managing and protecting natural resources. We promote the role of multifunctional farming and extensive agriculture in mountain areas in producing “public goods” on the long-term basis.
Our Union is one of the main non-governmental agricultural organizations. We work at different levels to prepare legislative proposals linked to both domestic and European agricultural policies. We are, for example, involved in the preparation of the CAP for the next programming period.”

When did Svaz Marginálních Oblastí decide to join Euromontana?
“We became a member in 2003. When Czech Republic entered the European Union, we wanted to be part of a pan-European organization, promoting common interests and goals of mountain areas, where we could share experiences and knowledge.”

What are Euromontana’s inputs for the work of your Union?
“We see Euromontana as an organization focused on the sustainability of European mountain regions and on the high quality of life for local populations.
In recent decades more people in Europe moved from rural areas to cities for better jobs and easier lives. Maintaining and creating jobs together with protecting our environment are very important to keep our population and attract urban residents. We see Euromontana as a useful tool to work on these topics.
While in Czech Republic we have been working on the promotion of extensive mountain farming for a long time, Euromontana can also significantly help us to bring this topic at European level.
With our experience in stabilizing farming in marginalized mountain areas, I believe that our Union, can enrich Euromontana. We can discuss problems but also share solutions and positive approaches.”