The Mountain Week was organised at EXPO Milano from the 4th to 11th June 2015 by the Italian Ministry for the Environment, in collaboration with the Alpine Convention, the Carpathian Convention and other organisations such as FAO Mountain Partnership.

It was a programme of events (conferences, exhibitions, meetings, etc.) dedicated to sustainable development, agriculture and mountains products around the world. Euromontana participated actively in the organisation of the two events on mountain food products held on the 4th and 11th June.

Being the motto of the EXPO, “Feeding the Planet, Energy for Life”, the organisers considered that mountains should have a special presence on the event, taking into account that they play a vital role in nutrition and food security.

This high level opening conference analysed the contribution of mountains to sustainable and high quality food. Several speakers, like, Barbara Degani, undersecretary of State of the Italian Ministry of the Environment, Land and Sea, insisted on “the quality of mountain products [that] could be an added value for producers” or on the disadvantages (like low seasonality or colder temperatures) that should be overcome by farmers. Markus Reiterer, General Secretary of the Alpine Convention was even speaking of “heroic agriculture” in mountain areas. This conference also tried to emphasize how the adequate legislative framework is put in place by EU, national, regional and local authorities. 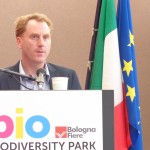 Thomas Streifeneder from EURAC and member of Euromontana gave some data and figures (see here his presentation) about mountain agriculture and explained its difficulties, insisting particularly on the decrease in the number of farms in the Alps in the last thirty years or on the lower productivity in mountain areas. 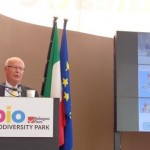 In that context, the new optional quality term defined at EU level should appear as a key opportunity for mountain farmers to develop and better market their high quality mountain products, as explained Jon-Andreas Kolderup, vice-president of Euromontana. He particularly insisted on the definition of this new quality term, its derogation and the remaining work to do, including for the national and regional authorities in order to adapt the scheme at their levels and encourage producers to use it (see here his presentation and here a video).

Finally, Marie Clotteau from the secretariat of Euromontana animated a roundtable on how we could facilitate the development of mountain supply chains. According to Alessandra Pesce, in charge of the technical secretariat of the Italian ministry of agriculture, Italy is currently thinking on how to implement the new EU legislation and will probably limit the derogation to 10-12 kilometers (instead of the 30 km authorized by the European regulation) for the production and transformation of mountain food products. But reflexion is still on-going, notably on the ways to control the use of the quality scheme.

For Paolo Angelini from the Italian Ministry of Environment, the Alpine Convention could help to implement the quality scheme at the Alpine level, but they are still expecting feedback from stakeholders (and particularly farmers) before really encouraging its implementation.

For Emanuela Zilio of the University of Unimont, member of Euromontana, trainings and networking for both farmers and students explaining how certification process is working will help to development mountain supply chains.

Finally, for Rosa Laura Romeo from the Mountain Partnership, a label at global level should be encouraged to promote not only mountain products but mountains in general. The idea has just been put on the table during a meeting in May 2015, but neither its difficult implementation at international level, nor the crucial problem of how the fake products could be controlled and sanctioned, nor how this global label could be integrated with the already existing EU optional quality term were addressed and they remain as major pending issues.

The final event of the Mountain Week dealt with green marketing for mountain food products. Having regard for the growing attention by consumers for green products in the food sector, the meeting allowed to meet and support network creation among businesses in the agri-food sector operating in the mountains, especially in Italy, as a means to promote global market-orientated strategies.

Carlo Sangalli, President of Confcommercio stressed the themes linked to mountains which are of key importance for the development of those areas and also have great impact in the valleys: sustainability linked to farming production and environmental issues, social and cultural aspects related to identity and tourism as a combination of land and human factors.

Simona Vrevc, Deputy Secretary General of the Alpine Convention pointed out the importance of the existing initiatives to give excellence to mountain products, and the need to support sustainable production. Her organization is developing recommendations about common labeling of mountain products, based on their added value. They consider that as mountain products are competing at world level, they need a common approach. Producers must profit from the fact that consumers are nowadays looking for quality and “stories” linked to production.

The representative from Regione Lombardia, Ugo Parolo, talked about the existing Italian macro regional strategies to promote mountain farming products and the need to rethink the existing links among mountains and citizens to create favorable economic conditions which avoid people abandoning mountain areas. It is necessary to pay special importance to the fact that the decisions are taken at local and regional level.

Universities also played an important role at the event, with the presence of representatives from UNICAM and UNIMONT. Both of them are involved in projects linked to connecting the quality of the products from the mountains with the quality of those areas. Anna Giorgi, from UNIMONT, intervened as a member of Euromontana with a presentation concerning the new optional quality term “Mountain product” developed by the European Commission and the role the association is playing with the aim of contributing to improve the quality of life of the inhabitants of mountain areas. Euromontana is aware that the perception of consumers of mountain products is lined to pure, traditional and quality food and also to concepts like health, pureness, good raw materials, authenticity, tradition, great taste and cultural value which are often linked to origin. Being this so, the members of the association are exploring the possibilities the use of this quality term could bring to farmers in mountain areas.

The speaker from the Italian Ministry of Agriculture explained that they are nowadays working on a Decree about this quality term and stressed the important role of mountain farming, not only as food producer, but also for safeguarding the land, preventing environmental problems, generating employment and promoting tourism. Thus governments should support it.

The representative from the World Rural Forum (WRF), Jone Fernández, presented the achievements of the celebration of the International Year of Family Farming 2014 (IYFF), declared as such by the General Assembly of the United Nations, coordinated by the WRF and promoted by civil society as it had never happened before. More than 360 organisations from 60 countries of the 5 continents participated in the campaign. She pointed out the creation of 52 National Committees led by farmers’ organisations which involve 745 stakeholders all over the world, which are promoting dialogue in order to boost public policies in favor of family farming. Many legislative and budgetary changes have already been approved and others are on their way. There’s an increased awareness worldwide of the important role family farming plays and this has led to numerous statements, policy declarations, manifestos and memorandums and to important commitments from international organisations such as the IICA and FAO. The success of such a mobilization, has led to the approval of the IYFF+10, which will keep this campaign alive for the next ten years.

Various Italian speakers presented different projects related to marketing products linked to the territories. There’s an increased demand for products such as funghi, chestnut, tannins, cork or cherries. Thus new possibilities to sell the excellence of these products are envisaged. Neutraceutics in the Aosta Valley are also being studied and will try to sell the image of products which are beneficial for our health. Many of them mentioned the importance of e-commerce to open new marketing ways for these products and new innovative packaging systems are also being developed.

There was a common approach regarding the need for working together, bringing closer farmers and research, keep working on the opportunities mountains offer and as Anna Giorgi pointed out, “Mountains need to speak with one voice”.

🏞 Mountains can innovate to boost the post-COVID recovery of tourism and make the sector more sustainable says the Mountain Partnership 👉Get inspired by some good practices from Europe and beyond and learn more on the recommendations!➕Sustainable tourism is a key issue for mountains' young people, see more in our recent report on mountain youth ⤵️www.euromontana.org/en/being-young-in-a-mountain-area-euromontanas-report-is-out/➕The recovery and sustainability of mountain tourism can also be supported by the Cohesion Policy, see how in Montana174's brochure ⤵️www.euromontana.org/en/project/montana174/news/25-ways-to-improve-living-conditions-in-mountains/ ... See MoreSee Less

Our new #Horizon2020 project Fire-Res has started!🌲Find out how it intends to change the approach to forest fire management and how we will innovate for more resilient forests! 👇 ... See MoreSee Less

On the 18th – 19th and 20th January 2022, Euromontana participated to the kick-off meeting in Solsona (Spain) of the Horizon 2020 research project FIRE-RES. This project aims to boost the socio-ecol...
View on Facebook
· Share

"Women move mountains" will be the theme of International Mountain Day 2022!

🏞 Mountains can innovate to boost the post-COVID #recovery of #tourism and make the sector more sustainable says the @UNmountains 👉Get inspired by some good practices from Europe and beyond and learn more on the recommendations!
https://t.co/5yfNPmV7zm

Keynote speech at the kick-off meeting of the Italian presidency of @_Eusalp to present the various policy recommendations which have been elaborated in the past years. @Euromontana

🌲Our new #Horizon2020 @FIRERESProject has started!

Find out how it intends to change the approach to #ForestFire management and how #innovation will achieve greater forest #resilience! 👇
https://t.co/5ZhPPABKJu