Overcoming the “costs of non-Europe” in EU border regions

Euromontana attended a workshop focused on the barriers and potentials for growth and development in EU border regions. The workshop was organised by the Regional Studies Association on Tuesday 10 October 2017 during the European Week of Regions and Cities 2017. The main question tackled during the workshop concerned why the integration of EU border regions is a challenge for local and regional authorities although the Lisbon Treaty set out territorial cohesion as a European general objective to ensure the provision of services of general interest to all (health, water, transport, education – to only name a few).

The costs of non-Europe in border areas

The economic case for cross-border cooperation was r 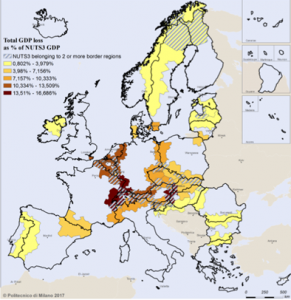 ecently made in the study “Quantification of the effects of legal and administrative border obstacles in land border regions” led by Politecnico di Milano for the European Commission. According to the study, borders hamper economic development and social inclusion. The study measured missed growth, or the “costs  of non-Europe”, using a regional growth model based on assets and data collected for the Eurobarometer 422. The results speak of themselves: €500 billion losses in terms of GDP are estimated for 2013 (representing 3% of EU GDP) and in border regions especially, the losses actually represent 9% of GDP. Nearly 6 million jobs are lost across the EU because of legal and administrative barriers. There is no Member State specificity in the results (no East/West divide) but the highest losses are measured in the corridor between France and Germany (see figure taken from the study – the study is not in open access but results are exploited in the staff working document accompanying the 2017 EC Communication “Boosting Growth and Cohesion in EU Border Regions”).

Indeed, Stefanie Dühr (Professor of European Spatial Planning Systems at Radboud University Nijmegen, Nijmegen School of Management, the Netherlands) presented the specific challenges border regions face such as population change, decrease of attractivity because of urban concentration, accessibility when mountains or large rivers constitute the border, and of course asymmetries in provision of services and/or compatibility of laws and regulations across borders which don’t always play out in favour of local inhabitants depending on where they live and work. 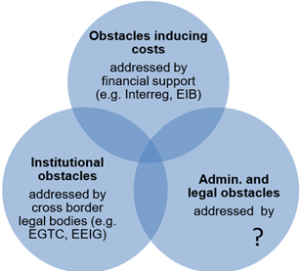 How to address these obstacles at the European level?

However, important gaps remain and above all, it is the local level which needs to implement solutions to these issues. The European Commission published in September a Communication presenting its 10 foreseen actions to boost growth and cohesion in cross-border regions (to know more, read Euromontana’s article, by clicking here – only for Euromontana members). 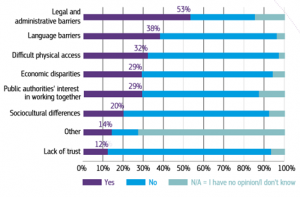 Tools implemented by the EC such as the cross-border Interreg programmes or European Groupings of Territorial Cooperation partly help to bridge the gap but Member States still detain a lot of power when it comes to national legal administration. Incidentally, this is the most important obstacle identified by the general public too as revealed in the online public consultation “Overcoming obstacles in border regions” (see figure taken from consultation report).

The participants of the workshop vividly discussed which governance should be implemented in cross-border areas in order to not lose economic and social potential. Indeed, the economic losses are said to come from overcosts generated by sub-optimal use of resources in border regions according to the study led by Politecnico di Milano for the EC. Reflexion will be pursued at the European level to find mechanisms to ensure border regions can jointly manage spatial planning and integrate national interests with cross-border development. This is particularly important for mountain areas which often constitute border areas.

Today we are celebrating our 4th General Assembly in Brussels, hosted by our colleagues from @Euromontana
#SIMRA4GA #H2020 #socialinnovation #socinn #rural

The Rural coalition expressed its opposition to the recent Council proposal for the post-2020 #CAP budget. Rural areas & #ruralvoices deserve an adequate budget to tackle to the challenges faced by our territories. See more in our common open letter⬇️

"The rural development Pillar of the CAP is indispensable to the coherence of the CAP. It is thanks to this Pillar that #youngfarmers can receive assistance to set up their farms, crucial support for them and their future in the sector," says @JDecerle at #ruralvoices 🇪🇺 🌱

A very strong message by MEP @paolodecastro during the #RuralVoices event in favore of a strong #CAP budget needed for delivering on ambitious plans #GreenDeal and #Farm2Fork!
#NoCuts

Reply on TwitterRetweet on Twitter1Like on Twitter6Twitter
Load More...