The European Parliamentary Research Service has published, in March 2017, a research briefing analyzing the mains drivers of rural poverty and social exclusion in the EU and the European policies and instruments to fight it.

The report presents statistics on rural poverty compared to urban poverty. Overall, in the European Union, people living in rural areas are more likely to be exposed to poverty and exclusion risk. Numbers show that rural poverty is slightly higher in rural areas (25,5% compared to 22,1% in towns and suburbs) with very contrasting situations across the continent as some countries (like Romania and Bulgaria) display a huge poverty gap between rural and urban areas. “In western countries, rural poverty seems to be concentrated in remote regions”, says the report. 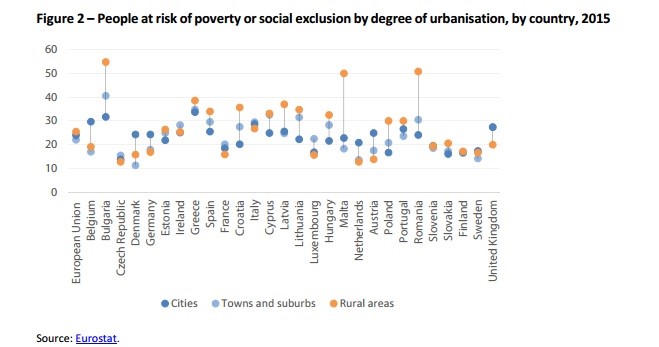 cited in the report

The report also lists the factors considered to be the main drivers of rural poverty and social exclusion:

In addition, the report presents the specific groups at risk of poverty in rural areas (small farmers, the Roma and women) and the role of the Common Agricultural Policy in ensuring a decent standard of living for farmers (income support under the first pillar and rural development policy under the second pillar).

These numbers show that the access to education and to a proper job are necessary to get out of poverty and social exclusion. There is the need to develop the attractiveness of these rural areas and this is the reason why Euromontana  supports the need for a White Paper on Rurality to enable living conditions and standards in rural and mountain areas to reach a similar level than in urban areas.