Populism and fundamental rights in suburban and rural areas

The European Economic and Social Committee (EESC) organised a public hearing on “Populism and fundamental rights – suburban and rural areas” on July 11th, 2019. The hearing discussed the socio-economic causes of the rise of populism in suburban and rural areas and the reasons for which populism is widely supported in these areas. The results of these discussions will contribute to the EESC’s forthcoming opinion on the topic.

According to research, there is no clear perception of populism nor of its socio-economic roots in the general public’s mind, meanwhile there are a lot of preconceived notions. Populism has been rising throughout Europe over the past few years, encompassing a mix of individual discriminations (against gender, LGBT, race, etc.), and wider anti-system, anti-cosmopolitan, anti-elite and Eurosceptic feelings. For the purpose of this opinion, the Diversity Europe Group of the EESC commissioned a study which elaborated a Populism Index (available here in English, French, German, Italian and Romanian). This index defined the multiple dimensions of populism such as anti-elite, majoritarian, authoritarian, mono-cultural and Eurosceptic. It has been tested for now on selected parties in Austria, France, Italy and Poland.

In parallel, the London School of Economics has mapped the Eurosceptic votes across Europe between 2013 and 2018. The map shows how widespread this issue has become, with Eurosceptics representing 26% of all EU-28 votes during national ballots between 2013 and 2018. This was demonstrated again recently through the results of the 2019 European elections which led to the creation of “Identity and Democracy” European group. This new nationalist group claimed 73 seats out of 751 (9.7%, a 3.3-point rise from the previous legislative period). 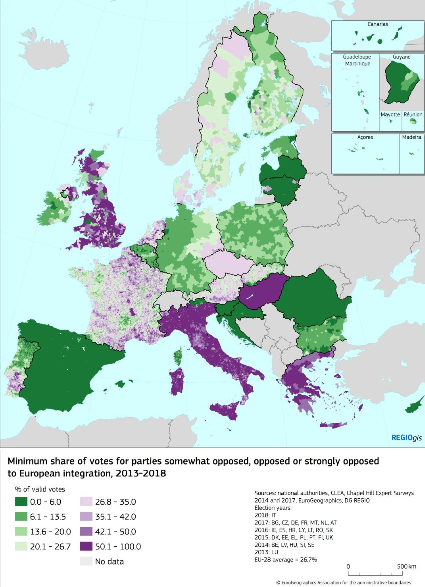 Concerning the socio-economic roots, scientific results show that the main drivers of populism are not equivalent with individual characteristics corresponding to retired, working class, white, low income, rural dwellers – in other words, the so-called “left behind”. They rather derive from a combination of a long-term economic decline coupled with a distancing from places of power, and a poorer offer of education and skills-building opportunities within a territory, leading to revenge vote. The low density of population and lack of employment apply only in case of extreme anti-European options while ageing and migration are connected to a lower share of extreme anti-European vote. In fact, urban territories are wealthier but subject to higher levels of inequality so anti-European vote stemming from low levels of income is actually higher there than in rural areas (all other parameters considered equal).

Possible solutions to address concerns about populism were presented during the event by civil society representatives, researchers and the Committee of the Regions, and were linked to both economic development and cultural change. On the material side, they encourage further public investments in services and especially mobility in rural areas as well as more targeted subsidies to small farmers. On the other hand, they argue that support for networking and community-building along with information campaigns and media education (targeting students, civil servants, private companies, etc.) must also be provided in rural areas.

The opinion is still in its draft version currently, the document is available here in Croatian, English, Hungarian, and Swedish. The opinion will be discussed and voted during the EESC plenary session on 30-31 October 2019. All the presentations of the event are available here.