In Croatia, Montana174 explains the link between rural innovation and the Cohesion Policy

On 24th February 2022, as part of the P-IRIS II workshop, the Local Development Agency Pins presented Montana174 project to local audience. The event was held in the coworking space of Delnice, Croatia, and it focused on the impacts and opportunties that the Cohesion Policy offers, especially with respect to innovation.

What is the connection between Cohesion Policy and rural innovation? 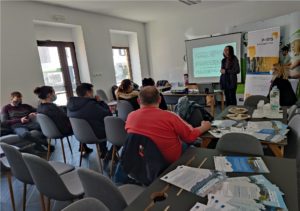 What did citizens learn?

The Montana174 project collected numerous examples of projects funded in the mountains of the Gorski Kotar region. Via these examples, the participants to the workshop residents had the opportunity to learn how the Cohesion Policy has a positive impact on the development of mountain areas and the people who live and work there. The workshop was also an opportunity to present to forthcoming activities of the Montana174 project to participants, such as the factsheets with future opportunities related to the 2021-2027 Cohesion Policy (to be published in April 2022) and the local workshops (to be organised in Croatia and all Montana174 in Spring 2022).