Listening citizens in Croatia: what do local residents want to do with the European funds in the mountains?

In the last week of April, the Local Development Agency PINS held 3 workshops about the benefits and opportunities provided by the Cohesion Policy to citizens in mountain areas of Croatia. The first workshop was held on the 26th of April at Delnice High School. The President of the Board, Dubravka Kolarić Zatezalo, presented the Montana174 project to the local citizens and introduced them to the concept of Cohesion Policy. After that, Josipa Liker presented outputs of Cohesion Policy for the period 2014-2020 and Natalija Mamula introduced the opportunities offered in the 2021-2027 period. Similar workshops were held at the Railway Technical School Moravice on 28th of April and the Municipality of Plaški on 29 of April. 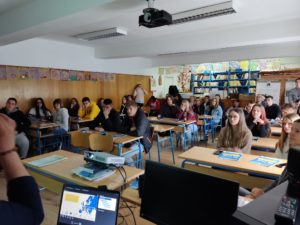 Ideas from citizens: how would they use European  funds in their mountains?

During the workshops, the Local Development Agency PINS launched a discussion with participants to collect their views on how the funds of the Cohesion Policy could be used in the mountains. Several ideas were presented: from supporting the cultural and social life, for instance by better equipping the sport center and opening a social and multimedia center in Delnice, to improving the conditions in the dog shelter in Lič.

In Moravice, attendees suggested that the funds of the Cohesion Policy could be used to finance informative workshops for primary school students about the importance of preserving the environment through the youth association. Also they mentioned to purchase of e-bikes, e-scooters and mobile shops for better mobility and mobile clinics to improve helth care. In Plaški, they discussed upon the possibility to create a nursing home with all-day care, a van for transporting people who do not have their own facilities, and most of all they emphasized the need for projects that will create new jobs as well as projects to encourage tourism development.

An opportunity to catch in the future!

Most of participants commented that they had no knowledge that Cohesion Policy is so present in their daily lives. More than 60% of all participants argued that they had learnt new things on the Cohesion Policy during the workshops and, a large share claimed that, in the future, they would like or might want to apply for these funds. To this end, some of the ideas brainstormed with citizens could be a good starting point to support the development of Croatian mountains.