Montana174 meets the students of the Delnice High School, Croatia 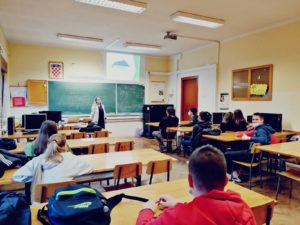 On 23rd November 2021, the Local Development Agency PINS presented the Montana174 project at Delnice High School, in Croatia. This event took place as part of the European Project Open Days, hold between 20th and 30th November.

Dubravka Kolaric Zatezalo, Director at the PINS Local Development Agency, told to the high school students the role of the organisation in the Montana174 project. Later, Dubravka illustrated some examples of initiatives and projects financed by the Cohesion Policy in Croatia between 2014 and 2020, and in particular in the Gorski Kotar region.

Few ewamples financed by the Cohesion Policy in Croatia are the renovation of the elementary school in Ivan Goran Kovačić Vrbovsko and the Wish women’s employment programme to couple elderly care with job opportunity for disadvantaged women.

Thanks to the numerous examples of projects implemented in Gorski Kotar, local students had the opportunity to learn how Cohesion Policy has a positive effect on the development of mountain areas and the people who live and work there.

Dubravka insisted that Cohesion projects contribute to the creation of new jobs in mountain areas and enriches the cultural life of its inhabitants. Furthermore, the Cohesion Policy in Croatia finances initiatives to strenghten social inclusion and to help the most vulnerable part of the population, such as the elderly, disabled people and unemployed population.

It is very important to teach young people about European projects, concluded Dubravka, as these have a direct impact on their lives.