Montana174 speaks about cohesion in the Aragon Region

On 11th February, the Province of Teruel (Spain) organised a conference to present the Montana174 project to the press of the Aragon Region (Spain).  On this day, the deputy delegate for Territorial Development and European Programmes of the Province, María Ariño, and the European programmes technician Bárbara Cerdán presented the Montana174 project in the village of Alcañiz, Spain.

Montana174 was born to make “the population more aware of the value and opportunities they [the European Cohesion Policy] generate”, they explained, with a particular focus on mountain territories. The Province of Teruel illustrated the initial results of the Montana174 project, such as the brochures with good practices financed by Cohesion Policy in mountains and the video testimonials.

In particular, they presented the Cohesion Policy from the eyes of Carlos, Anabel and Claudia, three mountain residents of the Aragon region. As María Ariño underlined, “the cases are reflected with fictitious people, but they are real examples, carried out in Aragon, with projects that have mainly been developed in the province of Teruel”. Indeed, by showcasing these examples, the Province of Teruel asserted that they aim at ensuring that “all the people of Teruel are familiar with the European funds”. 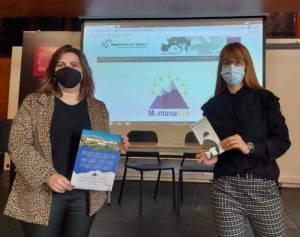 Moreover, the video testimonials from real Aragon citizens who benefitted from the Cohesion Policy funds were presented. In this case, the local protagonists are Pedro Villanueva, director of the Ariño Spa, Belén Soler, owner of “La Ojinegra” in Alloza and promoter of agro-ecological markets in the province, and Bárbara Verdecia, beneficiary of integration programme of the CEPAIM Foundation.

To conclude the event, the Province of Teruel informed the public that Montana174 is currently working to deliver some factsheets to inform local stakeholders on the Cohesion Policy 2021-2027 and the opportunities it will offer to finance initiatives in Europe’s mountains and in the Aragon region.