Since 2010, the European Union recognizes “a particular attention to mountain regions” through the Article 174 of the Treaty on the functioning of the European Union. More than 10 years later, the Montana174 project recorded the stories of about 20 mountain residents and released them in a collection of videos called “Cohesion stories”.

What are the stories told by mountain citizens?

In these short videos, mountain citizens narrate how the funds from the 2014-2020 Cohesion Policy changed their lives in mountainous territories. Local stories range across several topics from the help to establish youth-led businesses, as the story of Bikle Europe and Plankton Media in the Alps, passing through the creation of a multi-service building from mountain residents in the Municipality of Lutowiska (Poland), until home care services for more than 3,000 elderly people in Croatia. All videos go at the heart of what the Cohesion Policy allowed to achieve in the daily lives of mountain citizens of Europe, from youth to elder ages.

What are the stories told by mountain citizens? 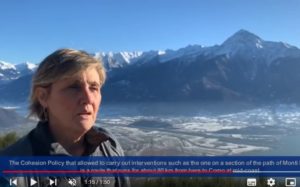 All testimonials come from residents of mountain areas and give few examples of what the 2014-2020 Cohesion Policy allowed to achieve in the Aragon mountains (Spain), the Alpine arc across the Auvergne-Rhône-Alpes Region (France), the Lombardy Region (Italy), Slovenia and Croatia, and in the Polish Podkarpackie Region.

An invitation for the future

“Why not make this area beautiful with the Cohesion funds from the European community?” asks Natalino Luchelli, from the Italian Alpine Club in Oltrepo’ Pavese, “Ours is a landscape, nature and environment of beauty”. His, it’s an invitation to keep using the opportunities given from the Cohesion Policy in the coming years to support the uniqueness of mountain areas in its territory and across Europe.

Do you wish to know more about Montana174?