What does cohesion mean for mountain citizens?

As the 8th Cohesion Report revealed that “Cohesion in the European Union has improved, but gaps remain” especially in rural regions. What have been the improvements made in mountains? What actions can be taken foreword? Montana174 gives a voice to mountain citizens.

“Cohesion in the European Union has improved”

On 9th February, the European Commission launched its 8th Cohesion Report on the progresses made to reduce socio-economic disparities across European regions thanks to the Cohesion Policy. This report acknowledges that in between 2014 and 2020 the cohesion funding represented 52% of the total public investments and served to finance projects to improve infrastructure, broadband connection, clean energy and skills, among others. In mountains, the Cohesion Policy financed for instance projects to bring broadband connection in the Greek rural areas, satellite technology for education in the Italian Apennines and rural mobility in Northern Portugal. This is because, through Article 174 of the Treaty on the Functioning of the European Union, a particular attention [shall be paid] to mountain regions”.

What does territorial cohesion mean for mountain citizens?

As the report states, without the Cohesion Policy, the reduction of public investments related to would have had even bigger impacts on European regions. But how did these funds impact the lives of mountain citizens? In the framework of the Montana174 project, we asked to 17 mountain residents moving from the Western to Eastern side of Europe. Among them, Pedro Villanueva, Director of the Spa Hotel Ariño in the Aragon Region (Spain), explains that the Cohesion Policy allowed its company to hire and train up to 65 people in territory that lacks a skilled workers. 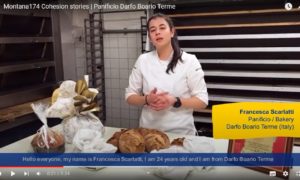 In Slovenia, Majda lives is a post-retirement centre funded by the Cohesion Policy and she says, “as we get elder, we get clumsy and awkward.” and continues “Here we do exercises that means a lot to us and give us back our elasticity, our mobility, and at the same time they mean also a lot to us mentally”. Moreover, the stories as the ones of Cedric and Tristan from Bikle Europe (France) or Francesca from the Bakery Darfo Boario Terme (Italy), also tells how young entrepreneurs can start and support their business thanks to the opportunities coming from the Cohesion Policy.

What actions can be taken foreword?

“Nonetheless, gaps remain and many drivers of growth remain concentrated in more developed regions and urban areas” states the 8th Cohesion Report and it claims that more place-based policies, beneficiary-friendly delivery of the policy and multi-level governance can serve to reduce the gap. To go in this direction, in April 2022, the Montana174 project will publish some educational factsheets to explain mountain citizens how they can apply to funds under the Cohesion Policy over the 2021-2027 period. This way, Montana174 intends to encourage the uptake of cohesion funds in mountain areas to finance projects that meet the concrete needs of citizens.

Do you wish to know more about Montana174?