Revitalising rural areas thanks to villages’ bistros: a practice guide from Massif Central

In rural areas, in particular in the most remote ones, bistros and cafes are places for local communities to meet but most of them also provide services and organise cultural events. The French government announced in September new measures to be implemented within its rural agenda, including the support to local shops and bistros. Starting such an activity from scratch is however far from being easy. A practice guide, produced by the Network of Natural Parks of Massif Central, gives you all the keys for success to build a vibrant place for a territory and its inhabitants.

1. Why do bistros and cafes matter in rural areas?

Bistros are well-known places where you can meet and exchange with other people, they contribute to the collective life in rural areas. Bistros and cafes are often the last local businesses to resist in rural territories. Why do they matter that much? The particularity of pubs and cafes in rural areas relies on the fact that they go beyond their status of private businesses and strongly contribute to the general interest of local communities. They do not only serve drinks but are also quite often small restaurants, relays of the tourist office, regional newspapers sellers, places for cultural events and even postal services providers. Thus, bistros are meaningful places for local communities in rural areas, especially in the most remote and isolated ones such as some mountain villages.

The number of local bistros has however been declining since the last century. In France, for instance, 500 000 pubs and cafes existed in the beginning of the XXth century while only 30 000 can be counted today. A direct consequence of the lack of public authorizations for such businesses but also of rural depopulation, the disappearance of local bistros directly affects rural populations. 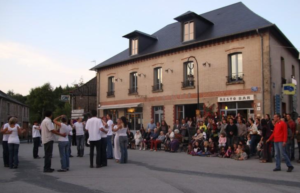 The “Atelier bistro” in the mid-mountain plateau of Millevaches, Massif Central, France, is the perfect example of the different social dimensions a local business can bring to a village. Created in 2003 by young newcomers, it offers meals cooked from local products, proposes concerts and debate evenings as well as film sessions. It also has a multimedia public point with Wi-Fi access and a grocery with local organic products. It contributed in making the village attractive and changed its image by gathering people from the area.

To encourage the multiplication of other bistros in rural and mountainous areas, like the Atelier, the Network of Natural Parks of the Massif Central, in France, produced a practice guide to help in all steps of the process. This practice guide is the result of a field study in collaboration with the association Pays’Sage, the Economic Chamber of the Corrèze County as well as students of the Master “Tourism and promotion of territories” of the University of Clermont-Ferrand. During their researches, they visited the bistros and cafes in the Massif Central to understand the reasons of their decline but also their social potential and development opportunities.

2. A step-by-step guide to become a manager of vibrant and inclusive local shops

Finding your way through rules and requirements 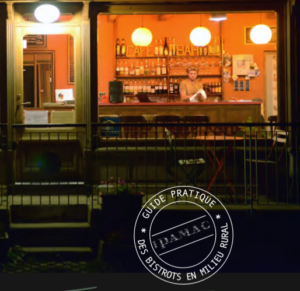 The practice guide mainly targets citizens willing to create or revive a village bistro. Bistro owners can find in the guide all the relevant legal information on accessibility requirements, hygiene rules, terrace right of occupancy and taxes among others. They can also find some advice on the different types of legal status eligible for such a business, as well as guidance to communicate on its opening, get food supply from local producers, organise cultural events and even manage their accounting. All these technical memos go along with examples of successful, inclusive and vibrant rural bistros which project implementers can get inspired by.

The guide is also addressed to municipalities and provides guidance to rural mayors willing to revitalize their territory. From local taxes applied to the business to the recruitment process, municipalities are guided step by step to ensure their local shops survive over the years. Above all, municipalities are strongly encouraged to reflect on their needs and on the type of social place they would like to develop in their village; therefore, they should pay a particular attention to the strategy of project holders and to the vision they have of a rural bistro. A list of networks and associations is also made available for them to share their experiences and problems with other rural actors facing similar challenges.

Diversification: in rural areas, bistros and cafes cannot simply be pubs. In order to be attractive places for inhabitants, their need to provide other services and to achieve a real social function. In addition to drinks, local businesses are strongly advised to propose simple and fresh homemade food. Using local products is also a great way to promote regional products and, for instance, to valorise mountain products from local farmers’ production. Likewise, bistros are ideal places to host a small grocery proposing local products. Being a postal relay is also a very interesting dimension, at the same time giving access to basic services to local populations in areas where public poste offices are lacking as well as offering a complementary income to the bistro owner.

Technical assistance: another key to success for those small businesses relies on getting support and creating a network. With long opening hours and administrative procedures, new owners need to be well guided. The practice guide provides the list of all the relevant actors to contact, from the municipality to chambers of commerce, farmers cooperatives and cultural associations.

Culture: the practice guide also offers the keys to develop cultural activities in local bistros. Whereas going to theatres and concert halls often requires taking the car, bistros in small villages can also be places hosting cultural events. In the Massif Central for example, the annual event “The Spring of Bistros”, organised by the association Pay’Sage, is a festival hosted in 50 bistros, programming more than 80 artists and proposing debates and workshops on topics such as hitchhiking, short-circuits or the future of regional languages in mountain areas.

3. Benefits of the development of bistros and cafes for mountain areas

As simple as it sounds, holding a bistro can be a key to revitalize an entire territory, especially in remote areas. Beyond serving coffee, they are places for social interaction, regional expression and cultural life. Thanks to diversification, bistros can also reduce the lack of public services by proposing basic services for the general interest, from postal services to school canteens.

The impacts of bistros in rural areas go beyond their initial purpose and indirectly, local businesses such as bistros and other local shops contribute to rural areas’ high quality of life and attractivity and help in fighting rural depopulation. Moreover, they are ideal places to develop new initiatives and social innovations, increasing community support in rural areas.

Within the framework of the French new “rural agenda” and the announced support to bistros and local shops, this guide can provide to project initiators with all the inspiration and technical information they need.

This practice guide is a great example of original initiatives towards the general public. Easily transferable in other countries, by adapting the legal content and examples, it can be a useful tool to encourage people to take the first step, especially young people.

Join us at Moving - Mountain Valorisation through Interconnectedness and Green Growth's webinar to discuss mountain products! 🧀We will focus on the implementation of the 🇪🇺 Optional Quality Term "mountain products"!📆 8 Nov💻 Online ... See MoreSee Less

🌄 #Montana174's event report on Cohesion Policy is out! 🆕Find there speakers' key messages on👉The structure of the new Cohesion Policy👉State of play of the uptake of funds in the mountains👉Ideas to improve the use of funds👉Recommendations for the post-2027 Cohesion Policyℹ Also available on the new platform www.montana174.orgERSAF Programas.UE - DPT PINS Skrad Europe Direct Isère Savoie RRA Podravje - Maribor Europe in my region Marie-Antoinette Maupertuis East Poland House ... See MoreSee Less

The Cohesion Policy is of great benefit to mountain areas, but its efficiency can still be improved. This was the general message of the final conference of Montana174, organised by Euromontana at the...
View on Facebook
· Share

🆕 Discover the Montana174.org platform❗️👉 Info in 6 languages on the Cohesion Policy in the mountains👉 Testimonials in brochure and video👉 Accessible explanations on the 2021-2027 funds👉 Thematic examples of inspiration for action in the mountainsℹ️ www.montana174.org/ ... See MoreSee Less

Pleased to be part of the @UNmountains's adventure again for the next 5 years! 🌄 With our member @CentroMontanha we will bring the voice of European mountains to the international level!
https://t.co/SJR0k5cCw8

TODAY is the official launch of the #EUCAPNetwork 🚀

Tune into our live stream and don't miss a thing!

Today at #RNAssembly we discuss the 🇪🇺 #EURuralVision, the #RuralPact Community and the new @eucapnetwork 🌄 Ready to bring the mountains on board! 🤝

🤔 What are the effects of #climatechange on the #mountain wine 🍷 #valuechain?

Our partners of Vinidea along with @MProhom and @MLopezVicente analysed the main challenges of 🌬️global warming that prevent the #development of #viticulture.