Smart Villages in mountain areas: how to achieve the transition?

The Smart Villages concept was the main focus of the  seminar “Smart Villages, a smart concept?” dedicated to mountain areas in particular and held in Esino Lario, Italy, last October 25 2019. The event was organised by ERSAF Lombardy – member of Euromontana –  as an opportunity to reflect on this particularly interesting issue for the development of mountain areas. The event included a great variety of experiences that showed the different dimensions of the Smart Villages concept, from social innovation to the involvement of the younger generations, from digitalization to the development of new forms of local entrepreneurship and governance.

Esino Lario, a small mid-mountain village near Lake Como, was chosen as the venue for the seminar as it could be considered as an example of smart village. For example, in 2016, Esino Lario hosted Wikimania, the world conference of Wikipedia volunteers, which represented an impulse for connecting the small mountain village to the outside world. The creator of this project explained how it was possible to mobilize the skills and passion of an entire community for the common interest, according to the spirit of the free territorial encyclopaedia. 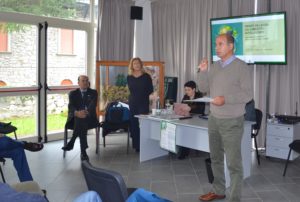 During the conference, participants were introduced to the European legislative framework  and  some successful projects were presented, such as the Horizon 2020 SIMRA  project -Social Innovation in Marginalised Rural Areas- and the Alpine Space project YOUrALPS -Educating Youth for the Alps.

The case of the Sila National Park, in Calabria, was also presented as an example of a sustainable agroforestry community. It will also host the next edition of the European Mountain Convention in 2020, focusing on  “Smart Mountains”.

Finally, the Premax Consortium is one of the most interesting realities in the Esino Lario area, a winning local model that led the mountain village of Premana to become a world symbol in the production of scissors and knives, starting from a strong local production tradition in the sign of quality and innovation.

The conference stressed how difficult the process of conversion towards a smart approach can be in mountain areas, often implying a change in local communities’ social  rules and daily habits. Creating strong networks and building collaborations, starting from the awareness of local identity values for address global innovation processes, thus appeared as key elements for the success of transition to smarter mountain villages.

For more information, please visit the event’s webpage, where you can find documents and presentations from the conference.