The Mountain Parliament of the Occitanie region, France: involving mountain communities in their region’s future

The Occitanie region, France, created a Mountain Parliament in 2018 to offer a new open discussion space to mountain local communities. The initiative aims at proposing a smarter governance model in the region and to involve citizens in the decision-making process. Created as an opened forum and inviting local communities into the public debate, this Parliament is a new governance tool for the Occitanie region to better understand mountain areas’ specific needs and adapt policies.

1. Why a Mountain Parliament in the Occitanie region?

The creation of a Mountain Parliament in the Occitanie region is an answer to a regional demand from citizens. Built on the same model than the pre-existing Sea Parliament, the Occitanie Mountain Parliament was created in 2018 – after a year of consultations with stakeholders in 2017 – in this region where mountain areas represent 55% of the territory, 47% of municipalities and 20% of the total population.

The Massif Central and Pyrenees are dominating the region’s geography as it can be seen in the below map and one objective of the Mountain Parliament is to promote the opportunities offered by these territories, including the mid-mountain areas of the Massif Central. Another goal was to create an open forum where an integrated vision of mountain territories could be discussed, including opportunities offered by all economic sectors. In this very attractive region, tourism is indeed an opportunity but is not a panacea when it comes to the sustainable development of an entire region and all economic sectors should be considered when shaping development strategies. 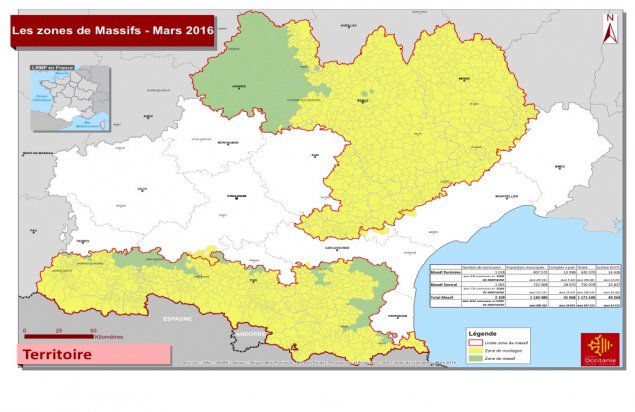 2. What is the governance model of the Mountain Parliament?

Different discussion platforms were created within the Mountain Parliament to facilitate debates. An online platform is open to anyone, including people from outside the region or the country. 700 persons are currently active on this discussion platform and can exchange messages and ideas. Participants’ profiles are quite balanced, with around 50% of institutional representatives and 50% of persons from the civil society.

The Mountain Parliament’s governance also implies the organisation of plenary sessions in the region – two were for instance organised in 2019. Any citizen willing to participate can join the meeting – more than 150 persons for instance participated in the plenary organised in Mende in April 2019. These meetings are open forums, where citizens from the region can express their views about the development of their territory. Plenary sessions are also a place to debate and structure the future work of the Mountain Parliament and adopt an efficient collective roadmap. Deeper work is indeed divided between different working groups. In 2018, a group of volunteers for instance investigated opportunities and challenges for renewables energies in mountain areas. In 2019, participants decided to work on 3 different issues:

Interested citizens are invited to join one of the working groups to discuss the topic and make recommendations. Working groups can investigate at local and regional levels, including by meeting relevant organisations, regional agencies and public authorities.

Policy relations between the region and its Mountain Parliament

The Mountain Parliament is thus a new consultative body the Occitanie region can appeal to, and the first to focus precisely on mountain areas. It will be considered as a regional think tank rather than a proper institution in future policy making processes. Indeed, there is strictly no binding relation between the Mountain Parliament and the Council of the Occitanie region. Collectively admitted from the start, this rule aims at avoiding any interference with another mountain related governance body of the region: Massif Committees – which were created by a national law in 1985, are more institutionalised and directly contribute to public policies connected to mountain territories at the Massif or national levels.

The absence of binding relation does not however mean no consideration of recommendations made by the Mountain Parliament. The Occitanie region recognises the Parliament as its first partner in the designing of its “Regional Mountain Plan 2018-2025” and for instance included in this strategy the recommendations formulated by the renewables energies working group back in 2018.

Generally speaking, the Occitanie region is responsible for the organisation of events such as plenary sessions, usually organised in small towns or mountain villages. The region is also in charge of the animation and reporting of these sessions, for which the meeting format usually used is from 10:00 to 16:00 with a regional products lunch provided.

To manage these activities, 2 persons are fully working on the Mountain Parliament in the region’s Directorate for Territorial Development. Officials from other services are of course also involved, especially when it comes to the provision of more policy related content or to the consideration of the recommendations formulated by citizens within the Mountain Parliament. Overall, 60.000 to 80.000 euros are needed on an annual basis to animate this new governance body of the Occitanie Region.

An additional participatory budget in 2019-2020

Besides this fixed operational budget, the Occitanie region also launched for the first time in July 2019 a participatory budget for its mountain areas. With an allocated budget of 1.2 million euros for 2019-2020, this initiative aims at financing promising projects in and for mountain territories to boost their development.

70 different initiatives applied in less than a month, hoping to be among the ones selected by citizens and financed by the region. Eligible projects must be developed in a massif area of the region and bring an innovation for the general interest. Investments can range from 2.000 to 100.000 euros. Until September 2019, all citizens of the Region, aged from 15, were invited to vote online to select the 28 best projects they would like the Occitanie region to financially support. Each citizen could in November vote for the best 3 projects; among the projects put to the vote was for instance “VirgoCoop”, a cooperative willing to revitalize the textile regional industry based on hemp cultivation as well as the project of Mende’s Tourism Office to install electric charging stations for electric bicycles in three different locations to promote cycling and sustainable tourism in mountain areas. Laureates will soon be announced, and projects will be financed from January 2020. The region will launch in Spring 2020 a second vote to select innovative projects.

For this new participatory approach of territorial development in mountain areas, the Mountain Parliament of the region has been given the responsibility to communicate about the participatory budget among a wider public, both to give the opportunity to initiative leaders to apply for funding and to encourage citizens to reflect on their vision of mountains and vote.

For more information on the future outcomes of the Mountain Parliament, please visit its Webpage or create a profile on its platform. To better understand other regional governance models, you can also find more information about Massif Committees in the report from the conference Cohesion policy in mountain areas: how to increase the contribution from mountains and benefits for mountain territories? co organised by DG REGIO and Euromontana in June 2017.