In March 2021, UNCEM, the National Union of Mountain Municipalities, Communities and Authorities, joined our network. UNCEM is the Italian national organisation gathering and representing the municipalities which are entirely or partially mountainous and the 360 mountain communities. UNCEM also represents some administrations and authorities (provinces, consortia, chambers of commerce) that operate in mountain districts. It covers 54% the entire area of Italy (10 million people).

UNCEM has developed its representative work with associated authorities in order to contribute to the promotion of the development of mountainous areas from a social, economic, civic, territorial and environmental point of view. UNCEM advocates that mountains are a national resource for a modern development of the country, UNCEM develops its activity in the service of the authorities that are members of the association. In particular, UNCEM’s activities aim at:

UNCEM has close relationships with different national associations representing local autonomies, with the Permanent Conference of the Presidents of Autonomous Regions and Provinces, with CNEL and with various private and public authorities interested in the development of mountain areas.

UNCEM was established on 20 November 1952, immediately after the adoption of the first act on mountains (n. 991 of 25 July 1952). UNCEM was created as a non-profit association, on a voluntary basis, acquiring progressively more institutional significance, like ANCI (National Association of Italian Municipalities) and UPI (Union of the Italian Provinces), and emerging as an advisory body for the Parliament and the Government in the drafting of acts and administrative decisions of local interest.

In this context UNCEM has ensured a constant contribution with proposals on all issues regarding the socio-economic and institutional development of mountain areas, as well as through the participation in committee and ministerial working groups and in different institutions. 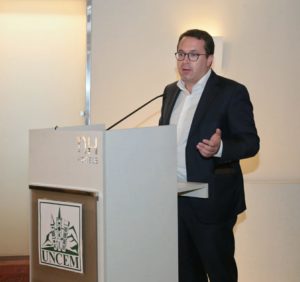 As far as the national context is concerned, UNCEM is represented in every regional environment with its own delegations.

In the international context, UNCEM is represented in the Committee of the Regions of the European Union established with the Treaty of Maastricht. It also has own delegates in the Congress of Local and Regional Authorities (CPLRE) of the Council of Europe. Moreover, it has contributed to the establishment of the European Association of the Elected Representatives from Mountain Areas (AEM).

"Can the Carpathians become a dynamic area with a high quality of life? Definitely🌄Should it be at the detriment of the #environment? Absolutely not, #SustainableDevelopment is the only way forward" says Marie Clotteau this morning at East Poland House event on #MacroRegions

This morning we present #OREKAMENDIAN booklet of good practices at the 'UMT pasto' webinar of @InstitutElevage on #pastoralism to provide inspiration on:
🌱grassland protection against fires
🧀promotion of #MountainProducts
🐏innovative herd management

The @EU_Commission has launched its Atlas of Demography 🇪🇺 Explore the tool to get detailed stats on #DemographicChange and trends like #ageing at European, national, regional & local levels ⬇️
https://t.co/bJJHRiNLpt

"I want a Pyrenean massif that can mitigate & adapt
to #ClimateChange and a territory in which a better quality of life is possible"🌱⛰@CTPcooperation Secretary General shares her dreams for the Pyrenees & how the CTP can contribute to #SmartMountains
https://t.co/8NRcUNT2lv

Reply on TwitterRetweet on Twitter1Like on Twitter5Twitter
Load More...