Mountains are full of energy 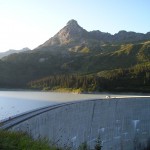 Mountain areas are rich of renewable energy resources. Mountains can make a key contribution through the use of their natural resources: water, wood, sun, wind, etc. For some resources, the potential for development is still huge. For others, like water which has been exploited for more than a century, the challenge is rather related to the rational use of the resource. In all cases, the question of how to compensate mountain territories for the use of its resources must be addressed.

Furthermore, mountain areas have always had an interest in energy efficiency and the primary objectives must therefore remain reducing energy, electricity and heat consumption and using energy resources more efficiently, for public, private and business purposes.

A context calling for action

Mountain areas have a great potential to contribute to the realisation of those objectives.

Euromontana started to put a stronger focus on the topic of energy in 2009 when the position paper on energy was developed. This position paper was appreciated by a broad audience all over Europe and gave birth to different kind of actions like the involvement in the FREE initiative.

Which multi-governance systems should be developed in order for the needs and the assets of small mountain communities to be better taken into account at regional level and so that those communities contribute more to the 2030 EU objectives?

If you wish to develop projects, don’t hesitate to contact us.