The Cohesion policy aims “at reducing disparities between the levels of development of the various regions and the backwardness of the least favoured regions” and according to the article 174 of the Treaty on the Functioning of the EU(TFEU), this policy should pay “particular attention to mountain regions”. Thus, the Cohesion policy has a key role to play in addressing the specific challenges of mountain areas.

Fair opportunities for all European citizens, wherever they live or work 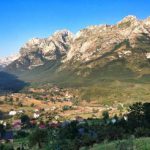 “…people should not be disadvantaged wherever they live or work in the Union […]. The concept of territorial cohesion extends beyond the notion of economic and social cohesion by both adding to this and reinforcing it.  In policy terms, the objective is to help achieve a more balanced development by reducing existing disparities, avoiding territorial imbalances and by making both sectoral policies which have a spatial impact and regional policy more coherent. The concern is also to improve territorial integration and encourage cooperation between regions.“

A particular attention for specific territories 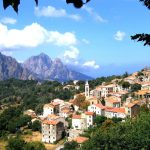 “In order to promote its overall harmonious development, the Union shall develop and pursue its actions leading to the strengthening of its economic, social and territorial cohesion. In particular, the Union shall aim at reducing disparities between the levels of development of the various regions and the backwardness of the least favoured regions. Among the regions concerned, particular attention shall be paid to rural areas, areas affected by industrial transition, and regions which suffer from severe and permanent natural or demographic handicaps such as the northernmost regions with very low population density and island, cross-border and mountain regions.“

Treaty on the functioning of the European Union, article 174, 2010 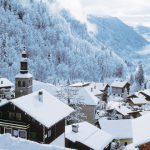 Macro regional strategies, in this context, play a key role and are decisive tools to better exploit the potential of mountain areas. The EU Strategy for the Alpine Region (EUSALP) provides a framework for cooperation in one of the main mountain ranges of Europe (the Alps),  involving several countries (including non-EU countries) and regions. To a lessere extent, the EU Strategy for the Danube Region (EUSDR) could be an interesting tool.

Territorial cohesion is a transversal objective: every Euromontana activity aims to contribute to this objective. We simply list here activities that are explicitly dedicated to this theme.

Euromontana has since its creation influenced the debate that led to the inclusion of the objective of territorial cohesion in the Treaty on the functioning of the EU.

Since then, the network has contributed actively to the different steps of the policy-making process on territorial cohesion:

network of European organisations and networks representing mountains, islands and sparsely populated areas. These organisations pooled their strengths and expertise to promote a constructive approach of development of these territories and to offer concrete proposals to the institutions.
These organisations notably contributed in a joint manner to the work of the Intergroup “Mountains, islands and sparsely populated areas” of the European Parliament.

– From 2014 to 2019, the European Parliament Intergroup on Rural, Mountainous and remote Areas (RUMRA Intergroup) aims to respond to the growing needs of those living in non-urbanised areas of Europe, which are often underrepresented in public dialogue. The Intergroup is a forum for policymakers and civil society to discuss initiatives and legislation which could have an impact on the well-being and future of more than 113 million people living in these rural, mountainous and remote areas.
The intergroup is chaired by Mrs. Mercedes Bresso, Member of the European Parliament (MEP), and actively supported by three grass-root organisations: Euromontana, Rurality – Environment – Development (R.E.D) and the Future of Rural Energy in Europe (FREE initiative).
The Intergroup is divided into six different subgroups, namely:

This Intergroup is actively supporting the development of an agenda for rural areas.

2. An active participation in Parliamentary reports on mountain areas

MEP Carbone wrote a report, adopted in November 2018, examining the inclusion in the cohesion policy 2014-2020 of territories with geographical constraints, such as islands, mountain areas and sparsely populated territories. With the contribution of Euromontana, the report provides the keys for a better integration of these territories in the framework of the cohesion policy.

MEP Iotova wrote an own-initiative report on cohesion policy in mountain regions, adopted in May 2016. Euromontana contributed greatly to this initiative report which calls for a specific agenda for European mountain areas and a dedicated strategy. The PADIMA project and the 2020 Mountains document written by Euromontana are explicitly mentioned in this report, recognizing the value of the work carried out by Euromontana.

MEP Bresso has written an own-initiative report on the alpine macroregional strategy: EUSALP. Euromontana contributed to this report. The final version of the report was adopted in September 2016.

3. Proposals for a Cohesion Policy more suited to mountain areas

In order to prepare for the implementation of the 2014-2020 programming, Euromontana published a document on “Toward Mountains 2020 process” which contains innovative opportunities and examples in mountain areas for each thematic priority, in order to show that mountain areas can make a major contribution to the implementation of the EU2020 targets. 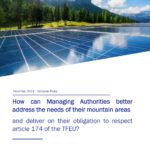 The European Commission has also opened a revision process on other fields of high relevance to mountains and territorial cohesion such as regional aid guidelines. Euromontana has dedicated specific attention to this issue in 2011 and produced a document replying to the Commission consultation in April 2012. We have also replied to the consultation on de minimis aid in October 2012 (available in the Members section).

Euromontana has conducted in 2008 a preliminary appraisal in preparation

for the green paper which led to a reference report: