Mountains still on the sidelines in policies, says the European Committee of the Regions

Mountain areas do not receive sufficient specific consideration, concludes the European Committee of the Regions in the recently adopted opinion “Enhancing Cohesion Policy support for regions with geographic and demographic handicaps (Art. 174 TFEU)”.

Drafted by Ms Maupertuis, President of the Regional Assembly of Corsica and member of the EU Committee of the Regions, the opinion stresses that efforts have been made to better respond to the constraints of the territories covered by article 174 of the European treaties – this article specifies that the Union shall pay a specific attention to regions which suffer from severe and permanent natural or demographic handicaps such as mountain, islands or cross border regions. In particular, the European Committee of the Regions welcomes the momentum offered by the launch of the Long-Term Vision for Rural Areas and the Rural Pact, the activities carried out through the Interreg programmes or macro-strategies such as EUSALP and the opportunities created by the new Policy Objective 5 of the 2021-2027 Cohesion Policy, which supports place-based initiatives in regions.

Not enough earmarked support in the new Cohesion Policy

Despite these efforts, the European Committee of the Regions’ opinion stresses that the policy measures implemented are still not sufficient to reduce the gap between the mountains and the other territories. The institution in particular notes the absence of earmarking of funds for Article 174 areas in the new programming period.

As stressed by Euromontana during the stakeholder consultation organised in May 2022 by Ms Maupertuis, the opinion also stressed that it is essential that mountain areas are not left behind in the implementation of Policy Objectives 1 and 2 of the new Cohesion Policy. 60% of Cohesion Policy funds have indeed been earmarked for these two objectives, for smarter and greener Europe.

Furthermore, as often pointed out by Euromontana and highlighted in G. Carbone’s report, there is still a gap between the programming of the Cohesion Policy and its effective implementation. Although partnership agreements and operational programmes take mountains into account, this is not systematically the case of funded actions, as demonstrated for example by the low number of CLLDs or ITIs in mountains in recent years. 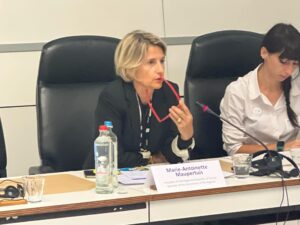 Ms Maupertuis recently shared her recommendations for a better consideration of mountain’s specific challenges at Montana174’s conference. During the event, she stressed that in addition to article 174 of EU treaties, article 175 specifies that the particular attention given to territories facing constraints should not only be given through the Cohesion Policy but also through all other European policies. This would be in line with the approach of integrated development, supported by the Long-Term Vision for Rural Areas.

Yet, Ms Maupertuis’ opinion points out the lack of consideration given to mountains for instance in mobility, energy, or competition policies. The same conclusions were drawn by Stefano Sala during the XII European Mountain Convention, where the study on mountain governance of Unimont – University of the Mountains was presented. The study demonstrates that mountain areas are usually considered in national policies related to agriculture, services, or tourism but very rarely in policies in favour of digitalisation, education, tax exemptions or research and innovation.

Euromontana welcomes Ms Maupertuis’ opinion to the European Committee of the Regions and is pleased to note a strong alignment with our own, long-held positions on the implementation of the cohesion policy in mountain areas. These observations should serve to alert mountain territories to the benefits of using certain tools and funds in the new programming period to make sure they are not left behind but should also help avoid repeating these mistakes in the post-2027 period. For more information on how to use the funds and tools of the Cohesion Policy in the mountains, you can consult the factsheets of Montana174.