The Desafio programme: a “rural Erasmus” to fight depopulation in rural and mountain areas

Desafio is a rural internship programme aiming at revitalising rural and mountainous areas by improving their attractiveness among students. Created in 2018 by the Chair on Depopulation and Creativity of the University of Zaragoza, Spain, the programme connects rural public and private organisations willing to train young people and students eager to put in practice their academic knowledge. The programme has been running for two years now.

“Forget about Brussels, Rome, Paris and take an Erasmus* in Belchite, Mequinenza, Leciñena, Cubel, Aladrén – where despite the size of these villages, there are also job offers”, is the leitmotiv of Desafio, a programme of the University of Zaragoza, Spain, proposing internships in the Province’s rural areas. The programme was designed to fight rural depopulation in the Province, where inhabitants gathered around the main cities from the 1960’s, abandoning the most rural and remote areas.

*The Desafio programme was promoted as a chance for a “rural Erasmus” but is an initiative developed and funded by the Province of Zaragoza and is not part of the Erasmus programme of the European Union.

1. What is behind the “rural Erasmus” concept?

Desafio: an internship programme to attract youth in rural and mountainous areas

Desafio is the result of conversations between Maite González González, manager of a Leader programme in Cinco Villas, and Luis Antonio Sáez Pérez, President of the Chair on Depopulation and Creativity of the University of Zaragoza. From their reflexions about attracting newly qualified people in rural areas emerged the idea to create a rural internship programme. The pilot phase took place during the Summer 2018 and was reconducted for a second edition in 2019.

Thanks to Desafio, students of the University of Zaragoza can take an internship in rural areas between June and November, which includes 120 to 500 working hours. A few rules were established, to insure the respect of Desafio’s objectives:

Desafio is coordinated by the Province of Zaragoza, through its Chair on Depopulation and Creativity, and the University of Zaragoza, which consequently implies a light governance structure.

Each year, organisations interested in welcoming and training students can express their interest to Universa, the employment and academic guidance service of the University of Zaragoza, and detail the profile and skills they are looking for. In exchange for which Universa publishes internship offers, receives candidates, organises interviews, and selects students depending on host organisations’ needs.

On the other hand, the Province oversees the promotion of Desafio among socioeconomic actors of the territory. Moreover, the Province of Zaragoza entirely finances the programme.

How much does it cost to make young people consider living in rural areas? 9.000 euros were allocated to the pilot phase and, in 2019, based on Desafio’s success, the Province tripled the budget, reaching 30.000 euros for the 2019 edition. This budget covers internship grants allocated to students, calculated each month upon presentation of travel and accommodations expenses bills:

Host organisations financially participate to a certain extent by allocating 50 euros per trained student to Universa in order to cover management expenses. From 2019, rural compagnies with more than 250 employees are also welcomed to join the programme if they cover internship grants.

2. Who can participate in the Desafio programme? 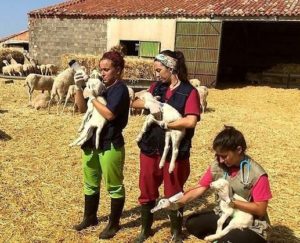 If located in villages counting less than 3.000 inhabitants, the following organisations can propose an internship within the Desafio programme: companies from all industrial sectors, public institutions, foundations and Non-Governmental Organizations, LAGs of LEADER and, from 2019, companies with more than 250 employees.

Host organisations are mostly family businesses, local administrations, and associations or projects – connected with or financed by public institutions – in the cultural or social sectors. Located in small villages, these organisations develop initiatives and businesses strongly connected to their territories and wish to attract new talents and possible future workers but also neighbours.

The diversity of host organisations during the pilot phase of the programme testifies the great interest of rural employers in training students. They for instance included a retirement residence in Romanos, two farms in Cubel and Villarreal de Huerva, the Sociocultural Association Purroy Unido and the City Council of Herrera de los Navarros. The success of the pilot phase encouraged other organisations to join the programme for the 2019 edition, such as the City Council of Aladrén or the Association of Industrial Architectural Heritage in Asopia. 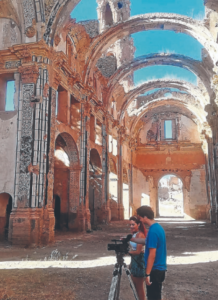 The diverse profile of host organisations is reflected in the heterogeneity of participants’ profiles. 13 students were selected to participate in the pilot phase in 2018 and 23 for the Summer 2019. Among them, 5 students of veterinary medicine, but also law, marketing, fine arts, social care, nursery and childcare.

What is there for them to learn in rural areas? Students in veterinary medicine of course found a perfect training location in local farms, but jobs in rural and mountainous areas are far from being limited to the agricultural sector. Architecture students for instance worked in Azuara to help in designing the future museum of industrial heritage in the village’s old flour mill while students in history worked with the association ‘Pueblos en Arte’ on the organisation of a cultural festival; not to mention future nurses applying their skills in retirement houses or law students testing their knowledge of local law in small municipalities.

3. Benefits of such “rural Erasmus”

A win-win situation for participants

The Desafio programme offers the chance to University students to complete an internship in rural areas; beyond the size of villages, it often suggests an easier selection process and less competition but also implies working in smaller teams, benefiting from a more personalised professional training and being part of a united community. For most of participating students, beyond tourism and outdoor activities, Desafio is their first everyday life experience in rural areas. “An experience equivalent to going for an Erasmus to another country” claims Luis Antonio Sáez Pérez. “Many times, the contrast between villages and cities in your own Province is greater than between two European cities.”

A few interns from the pilot phase participated again in the 2019 edition and expressed their wish to move out from Zaragoza once graduated, a win-win situation for local businesses, associations and administrations who will enjoy the arrival of a skilled and trained workforce. As for students, most of participating organisations expressed their satisfaction by renewing their participation in 2019.

Promising development impacts for the Province

The benefits of such a programme for the Province’s most rural and remote areas are certainly positive. Attracting youth there is key to reverse depopulation trends and, in a snowball effect, develop more local goods and services. Such impacts however require long-term efforts, as it implies to change the perception of rural areas and show how diverse and rich are the professional and personal life options there. Still, there is a good point for rural areas: small organisations and businesses are much more pro-active and quicker for administrative processes.

Not a high budget initiative per se, Desafio is rather a time-consuming initiative. A lot of time was spent to convince people and many bureaucratic or legal obstacles curved the programme. If legally not possible in the Province of Zaragoza, some extra ideas may be applicable in other parts of Europe, such as inter-generational exchange with common houses for older adults and young trainees or internships for medicine students with family doctors in rural areas.

The success of Desafio led Professor Luis Antonio Sáez, Director of the Chair on Depopulation, to maintain contacts with the Department of Education of the Government of Aragon in view to expand the programme at regional level.

For more information on scientific evidences leading to the creation of Desafio, on the marketing and communication around the programme and on the results from the pilot phase, please read “Desafío programme: an Erasmus rural version for depopulated areas”.

You can also read the explanatory document disseminated among students in 2019.
For more information on how to combat depopulation in mountain and rural areas, please see: